When you first visit Copenhagen, the first thing you’ll see are the houses lining tidy cobblestones streets and canals, and the beautiful Tivoli Gardens. But beyond these perfect moments, Copenhagen is an ambitious city with much a lot to explore.

First, there’s the design, Scandinavian as championed by Arne Jacobsen in the 1950’s has turned into a citywide aesthetic. Then there’s the food, some of Europe’s most accomplished chefs are turning Nordic cuisine on its head in delicious ways. Finally, there are the neighborhoods. Central Copenhagen has plenty of charms historic buildings and pedestrian shopping zones, and its peripheries, full of style conscious Danes and their local haunts, are also worth a visit.

Scroll down for more information and images on Copenhagen… 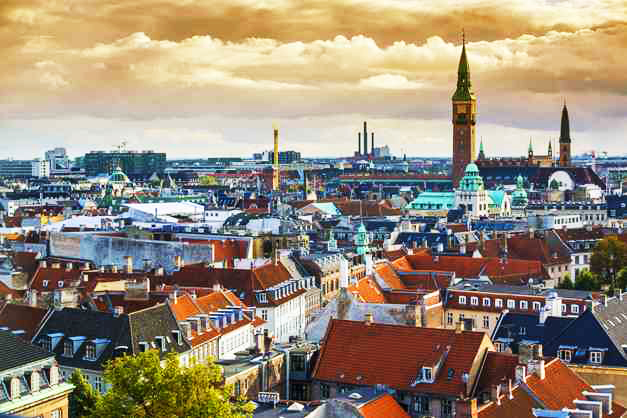 Copenhagen has seen a increase in bars, restaurants, shops and designers insisting on a less formal, relaxed way of doing things. Many of the city’s Michelin starred restaurants have opened second restaurants where the food as well as the service is more playful and relaxed. Beer bars are opening their own breweries and bartenders are creating creative cocktails at the basement of the city’s many boozy haunts.

Combine this playful spirit with the city’s stunning architectural beauty, from the royal castles to the attractive canals and characteristic brick buildings, as well as its rich cultural heritage, and you’ve got a city that’s worth spending more than a few nights in. 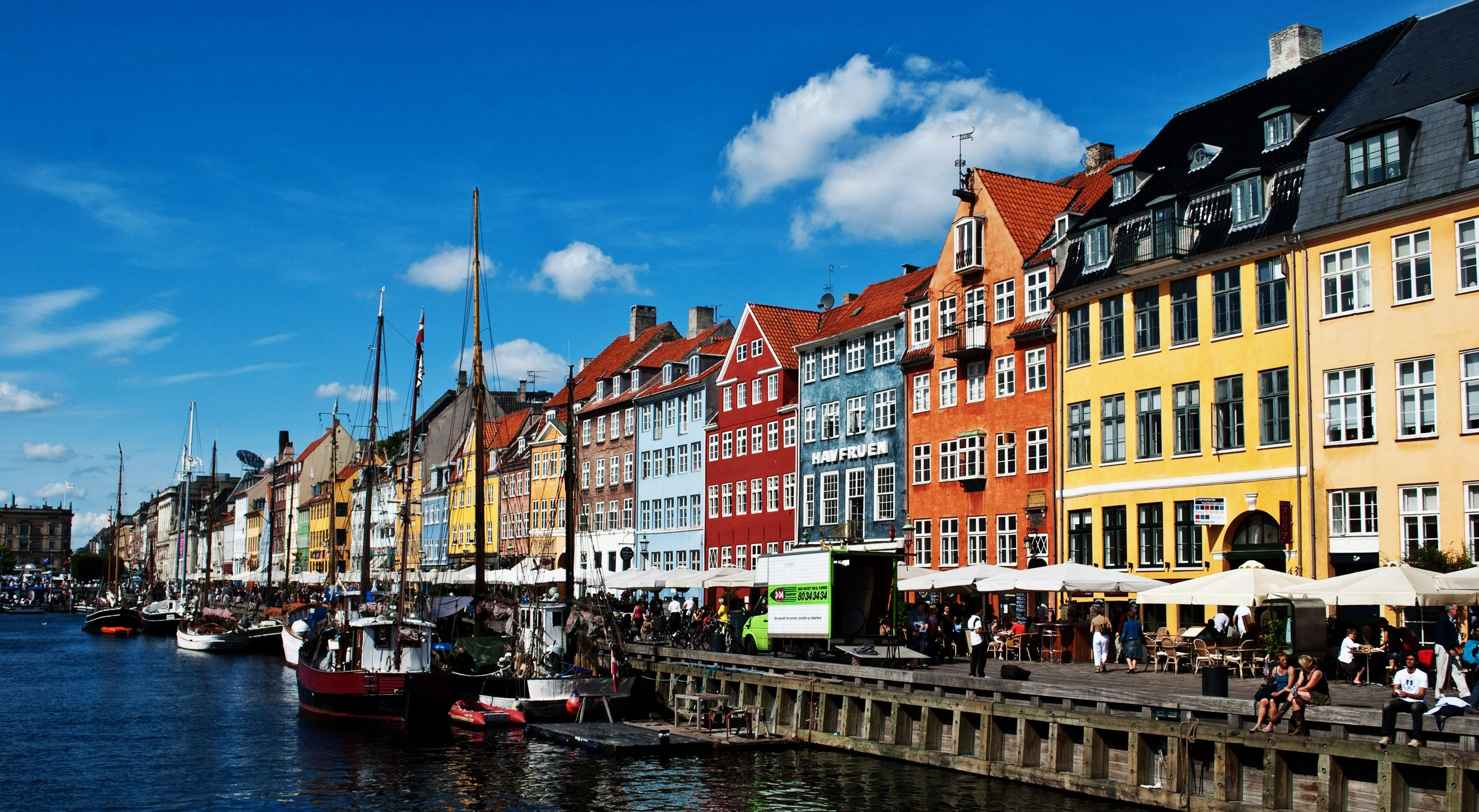 The best time to visit Copenhagen is Summer—June, July, and August—when the days are long and relatively warm and outdoor cafes are crowded. But few people make winter more enjoyable than the Danes, and the weeks leading up to Christmas are magical, with the city looking like the Royal Kingdom is when its streets, castles, and canals are covered in snow and ice.

Copenhagen isn’t known as the most budget-friendly destination, but this culinary mecca is more reachable than ever thanks to a growing number of more casual concepts opened by some of the city’s best chefs. In a city where 15 different restaurants boast 18 Michelin stars, a group of talented chefs are proving that incredible cuisine can exist without formality or a lofty price tag. As the chefs continue this trend, there’s no better time to eat your way through one of the world’s most exciting food cities.

A restaurant that Trafoodel recommends is Bæst. Bæst is an organic, Italian/danish-inspired restaurant in the Nørrebro area of Copenhagen. The restaurant has its own adjoined bakery Mirabelle that is outstanding. At Bæst, which literally means “beast”, is a unique Italian-style Copenhagen restaurant, where great Italian produce such as extra virgin olive oil and sun-ripened tomatoes co-star along with the best local produce sourced from talented organic farmers in Denmark. 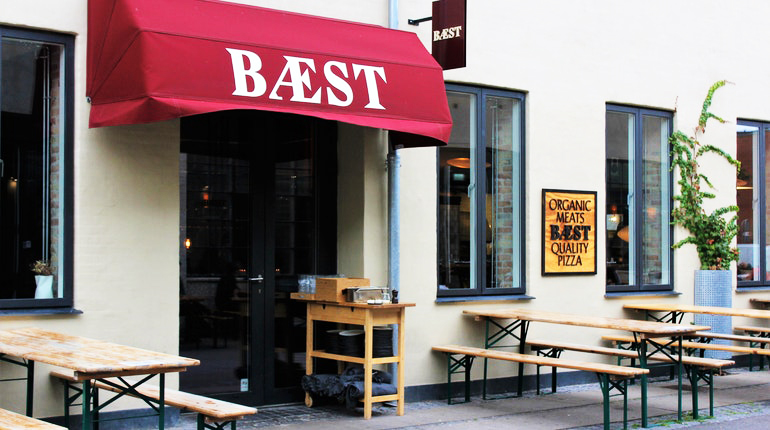 The focus is on high quality meats. The family style menu consists of different cuts of chargrilled organic meat, house-made charcuterie and wood-fired pizza slices. Above the restaurant is a micro dairy where fresh mozzarella is hand-crafted on a daily basis – technically a “fior di latte” made by biodynamic Danish cows’ milk.
Beside the dairy is a salumeria, where the chefs prepare different sorts of cured meats such as salami and coppa made from organic, free-range pigs from the famous Hindsholm-farm. 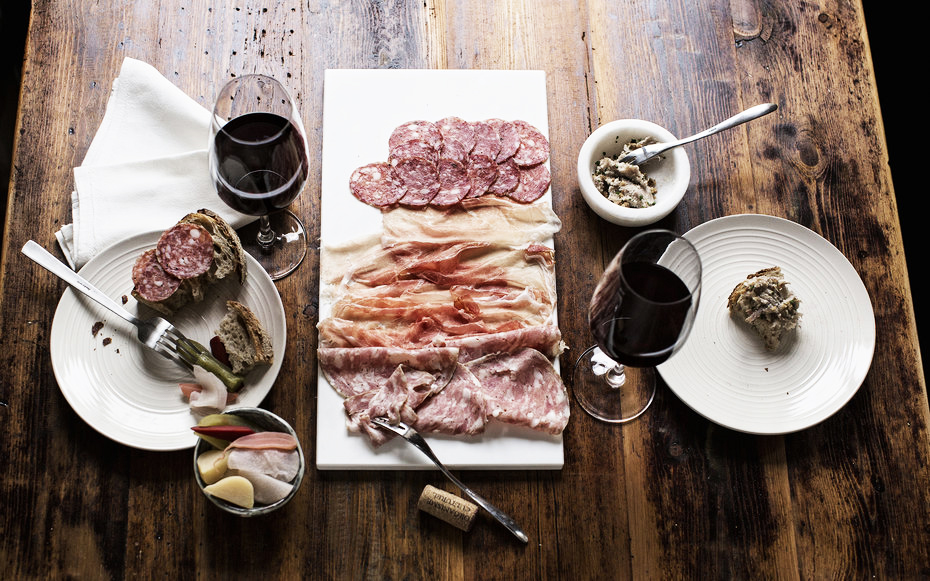 Bæst also has a beautiful bar where you can order classic Italian cocktails and Danish beer from organic micro-breweries Kølster and Herslev. The wine list features natural wine primarily from small Italian wineries scouted out by wine importer Vinikultur. 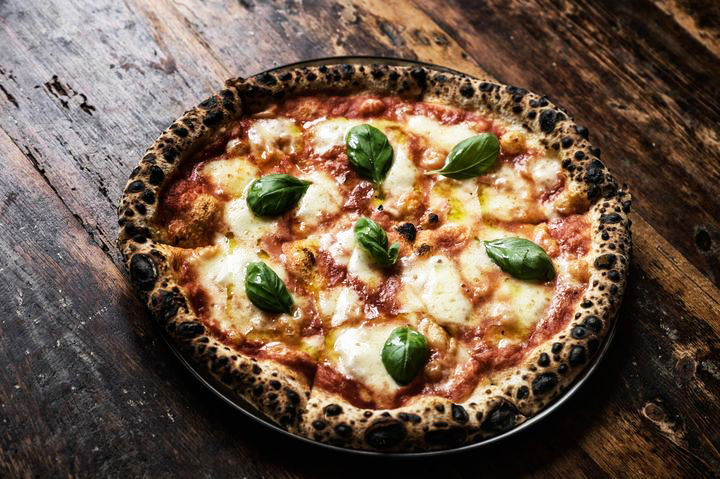 The Mirabelle bakery is connected to Bæst. The head baker, Carol Choi, produces the naturally leavened pizza dough for Bæst.

Mirabelle is also the new neighborhood hang-out for coffee drinkers. It is a place for locals to pick up freshly baked bread, the signature croissants and Mirabelle’s own ‘Italian Smørrebrød’ – a Roman pizza/focaccia/open-faced sandwich kind-of hybrid. 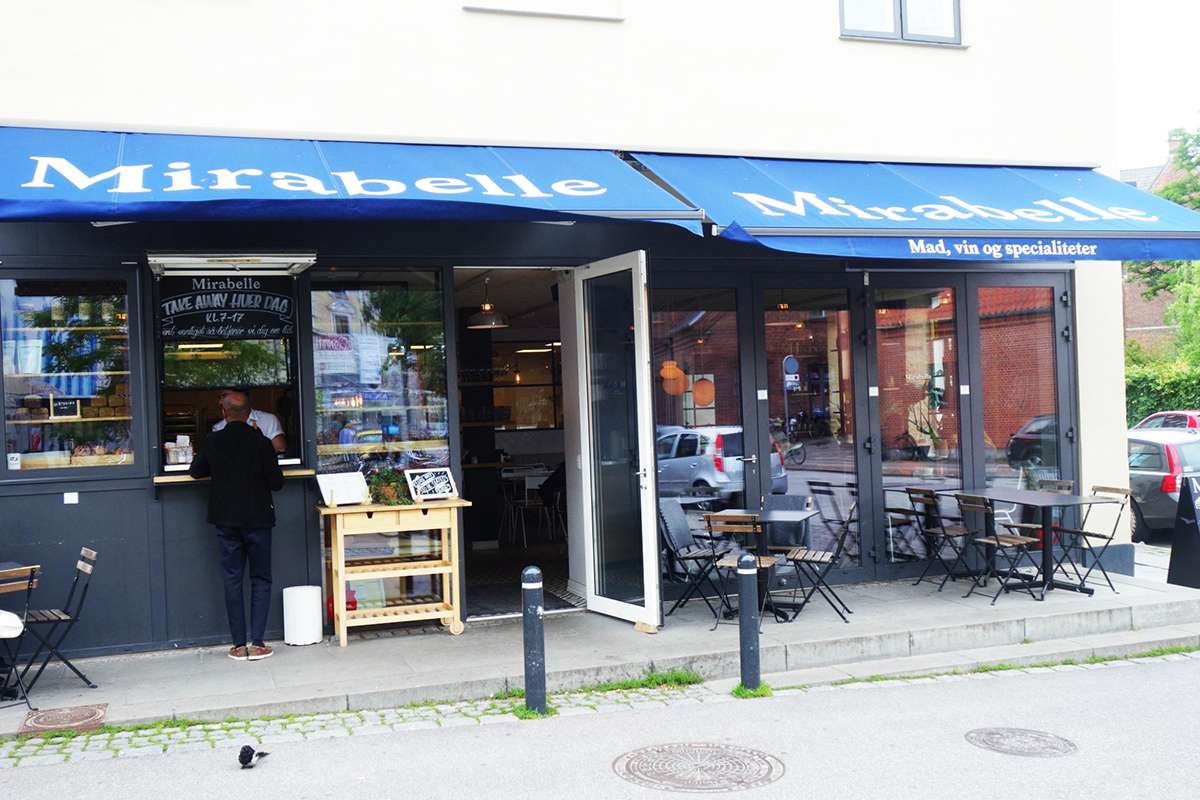 The flour used for the bread and pizza is a mix of locally grown, stone-ground flour combined with there own import from a small organic mill in Piemonte. 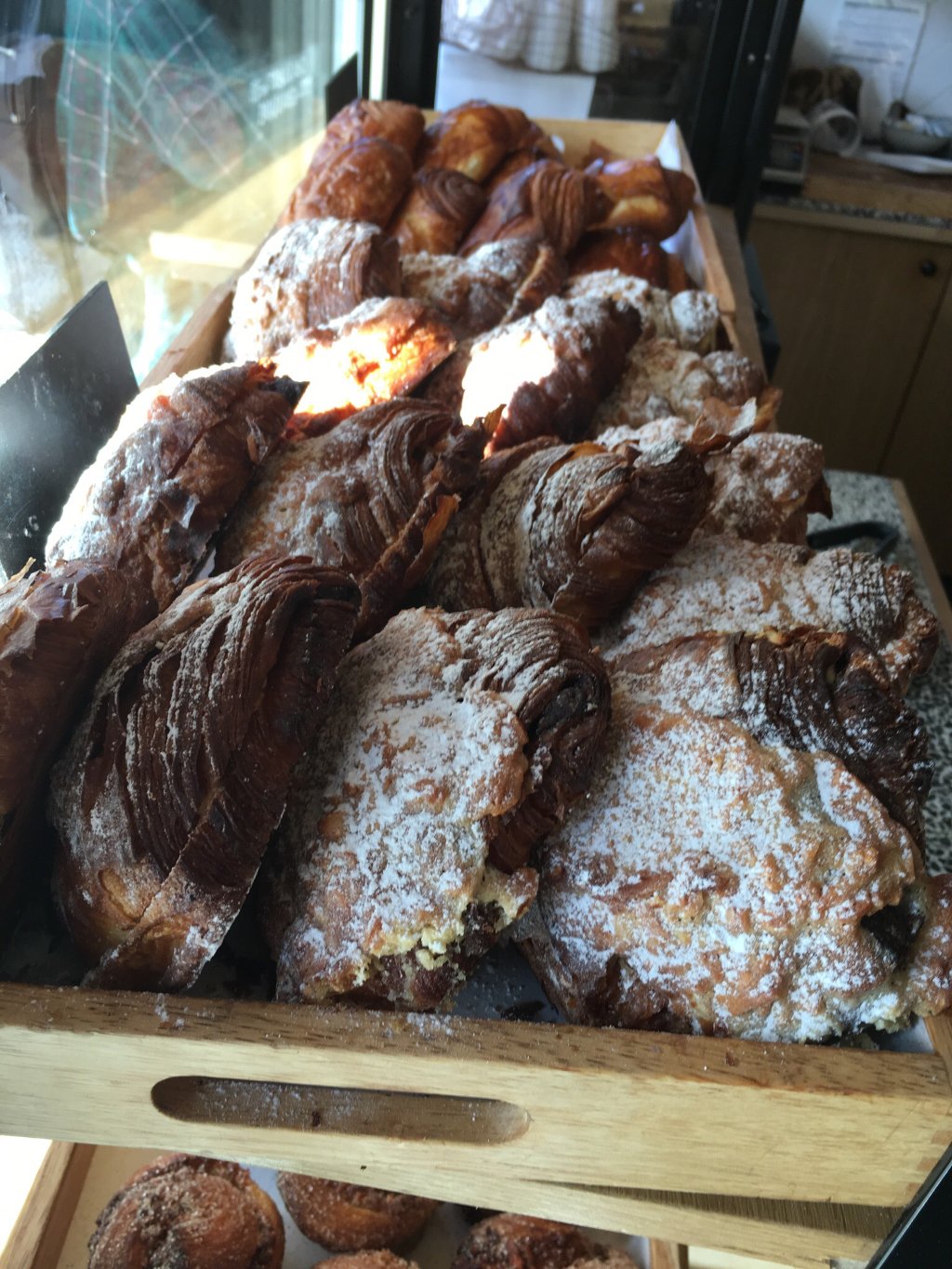 This approach to the Italian cuisine and its artisan baking is the result of years of traveling and research – and is something completely new to the Copenhagen food scene. Join the locals and visit Mirabell Bakery. 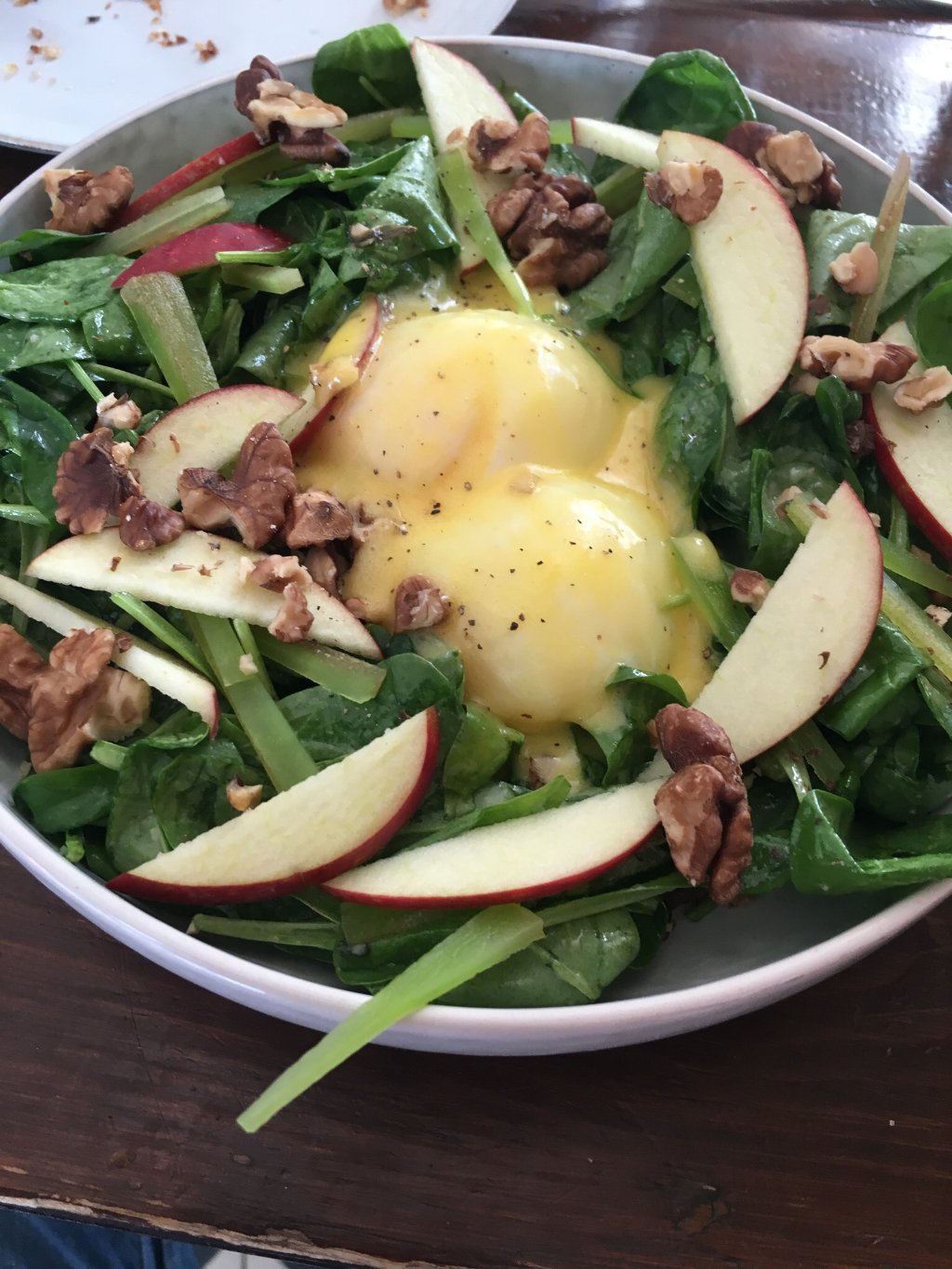 Copenhagen has a wide variety of hotels from your traditional old world style to your ultra modern Danish design.  You are really spoilt for choice in Copenhagen.

A hotel that has the best of both styles that trafoodle recommends is The Copenhagen Admiral Hotel. It is located in Copenhagen city center, surrounded by the city’s best shopping, the leading theaters and major tourist attractions. 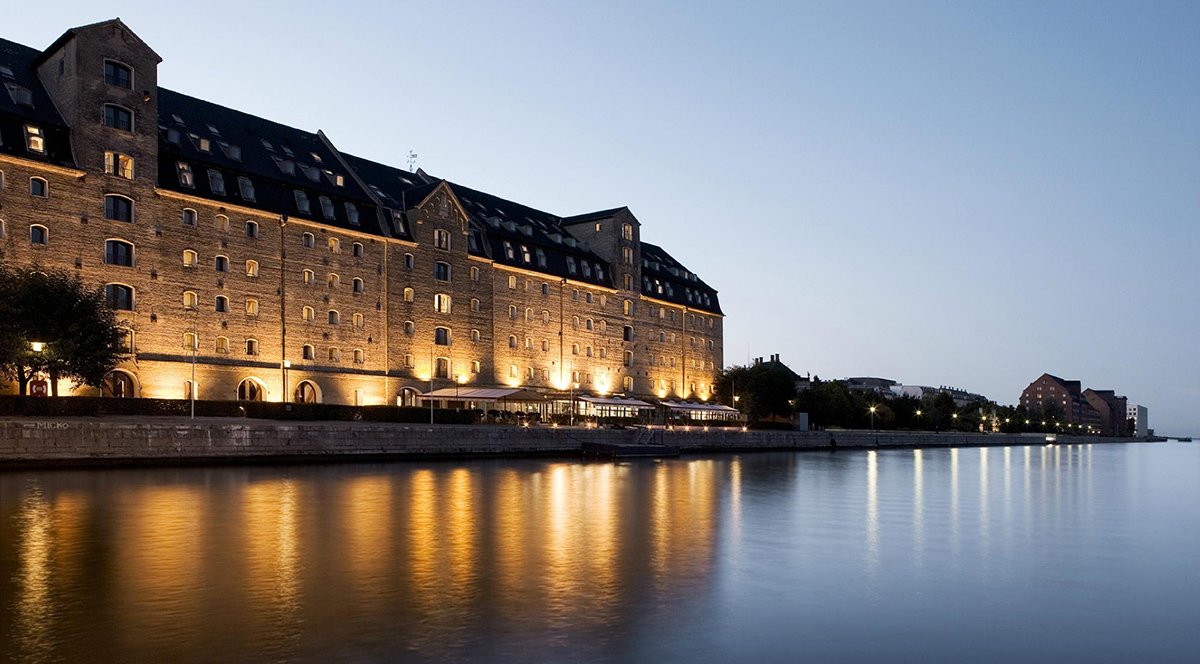 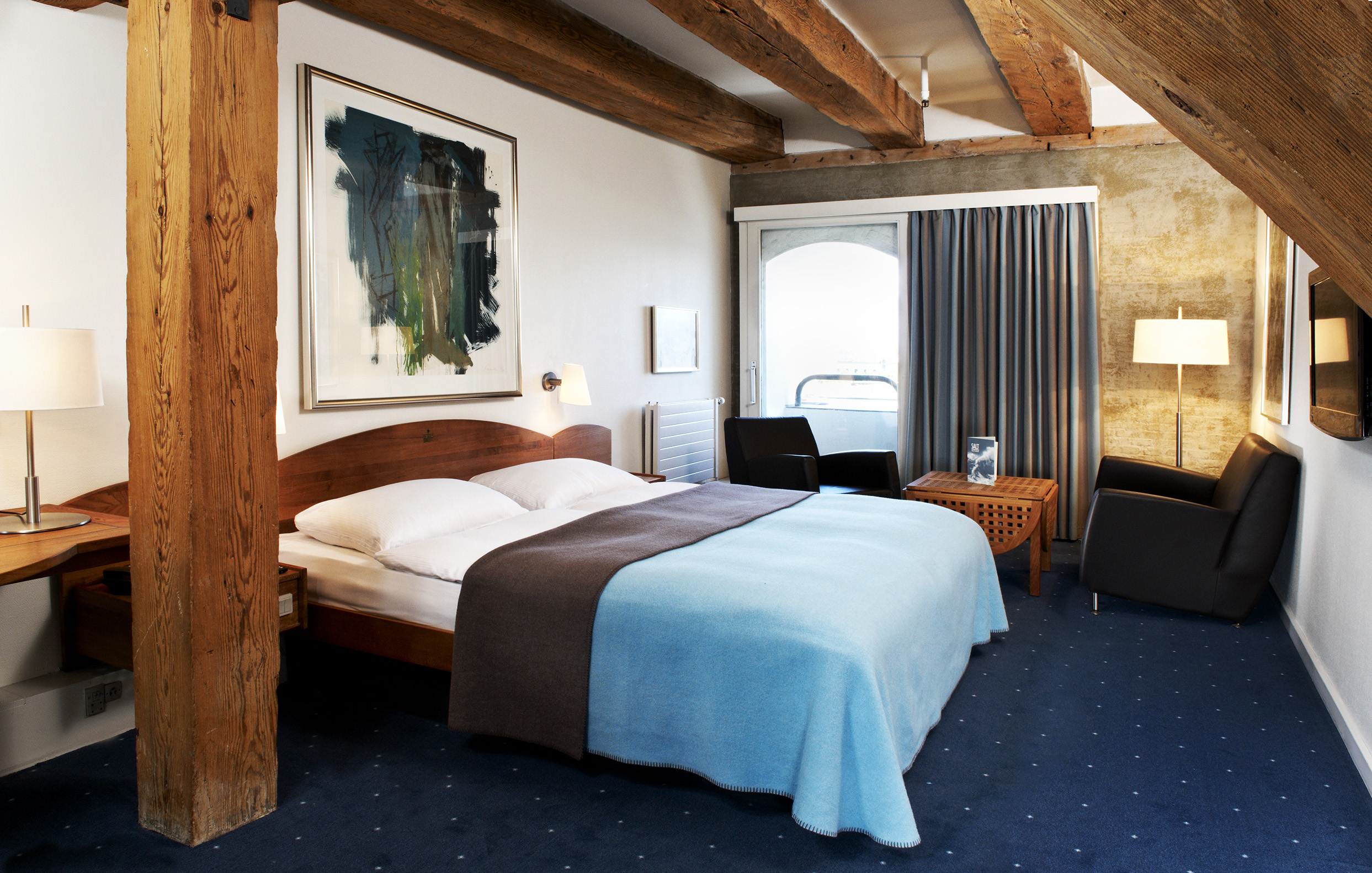 From the hotel there are superb views of the Opera House, the Royal Playhouse and the charming inner harbor. The Royal Palace, Amalienborg, and the Amaliehaven gardens are less than a minute away while the Little Mermaid and the impressive Gefion Fountain are both just a short walk along the waterfront. 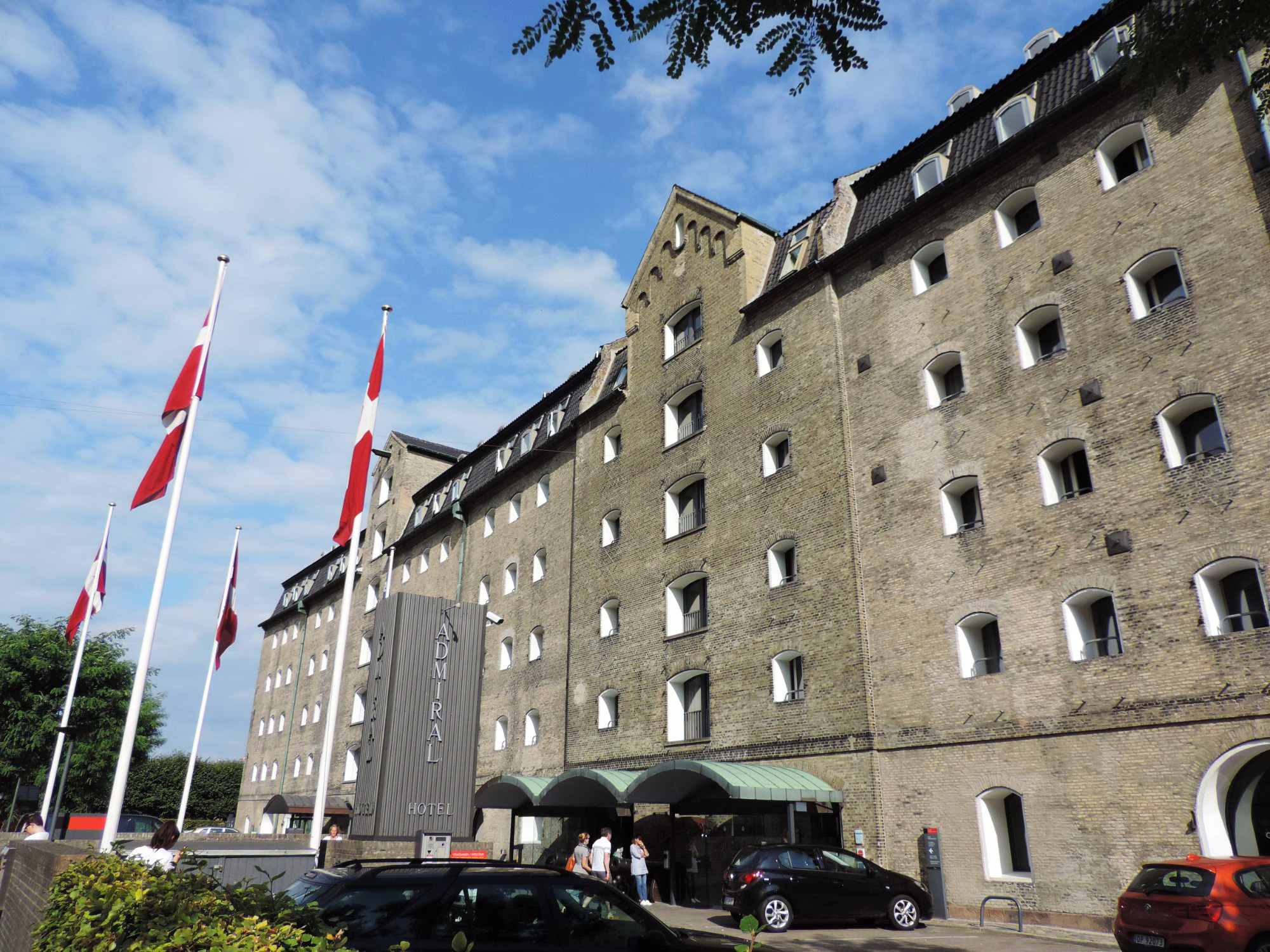 Another fantastic hotel with modern Danish design is the Radisson BLU Royal. This Hotel is a five-star designer hotel conveniently located just opposite Tivoli close to Strøget and the city center. The Royal hotel has newly renovated rooms with a excellent view over Copenhagen. The rooms are fully equipped with everything that you would expect when staying at an international five star hotel. You can enjoy a light meal or a drink at Café Royal where you will find a relaxed atmosphere and the children’s menu makes this a great choice for families. 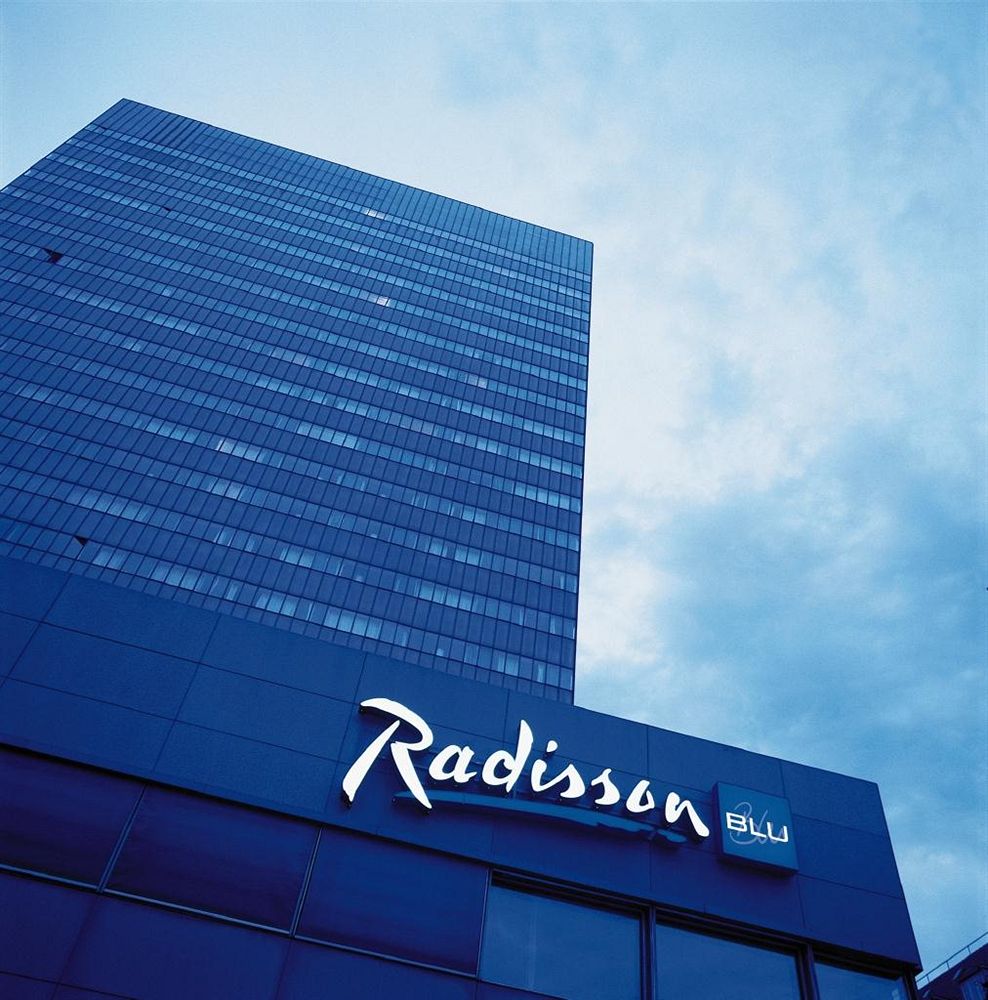 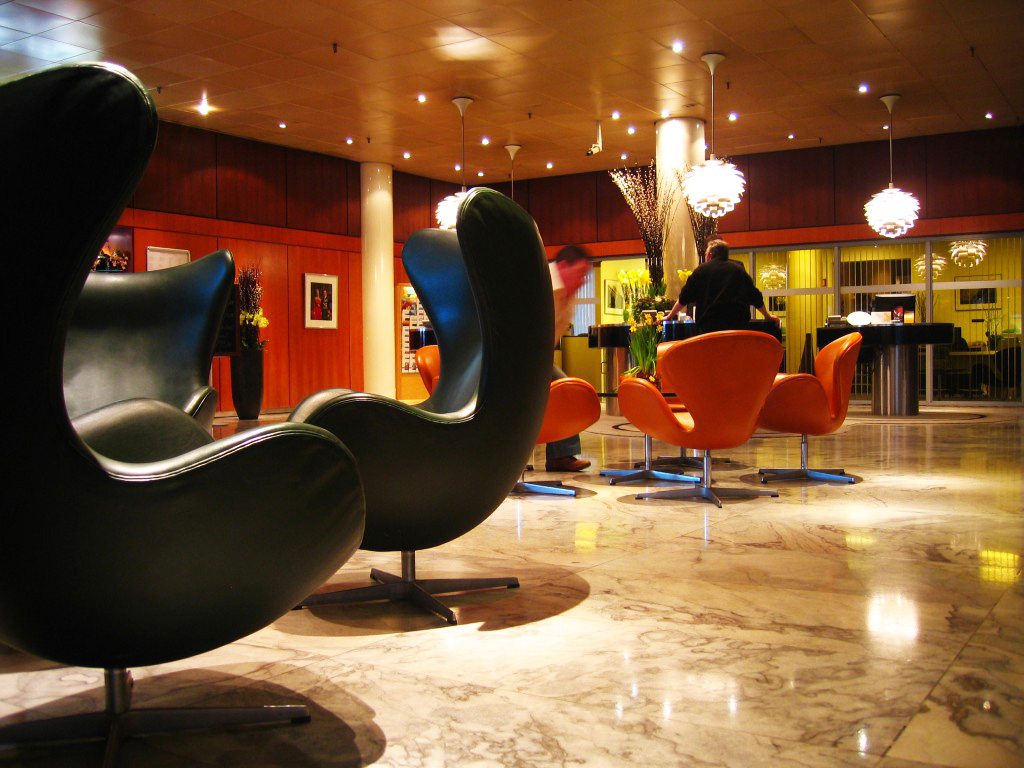 The hotel’s spiral staircase and reflective facade is complemented by modern furnishings and décor, including our unique “Swan” and “Egg” chairs. The 260 rooms and suites offer plentiful amenities, such as Free high-speed wireless Internet and 24-hour room service. There is also a number of children’s services, such as babysitting. 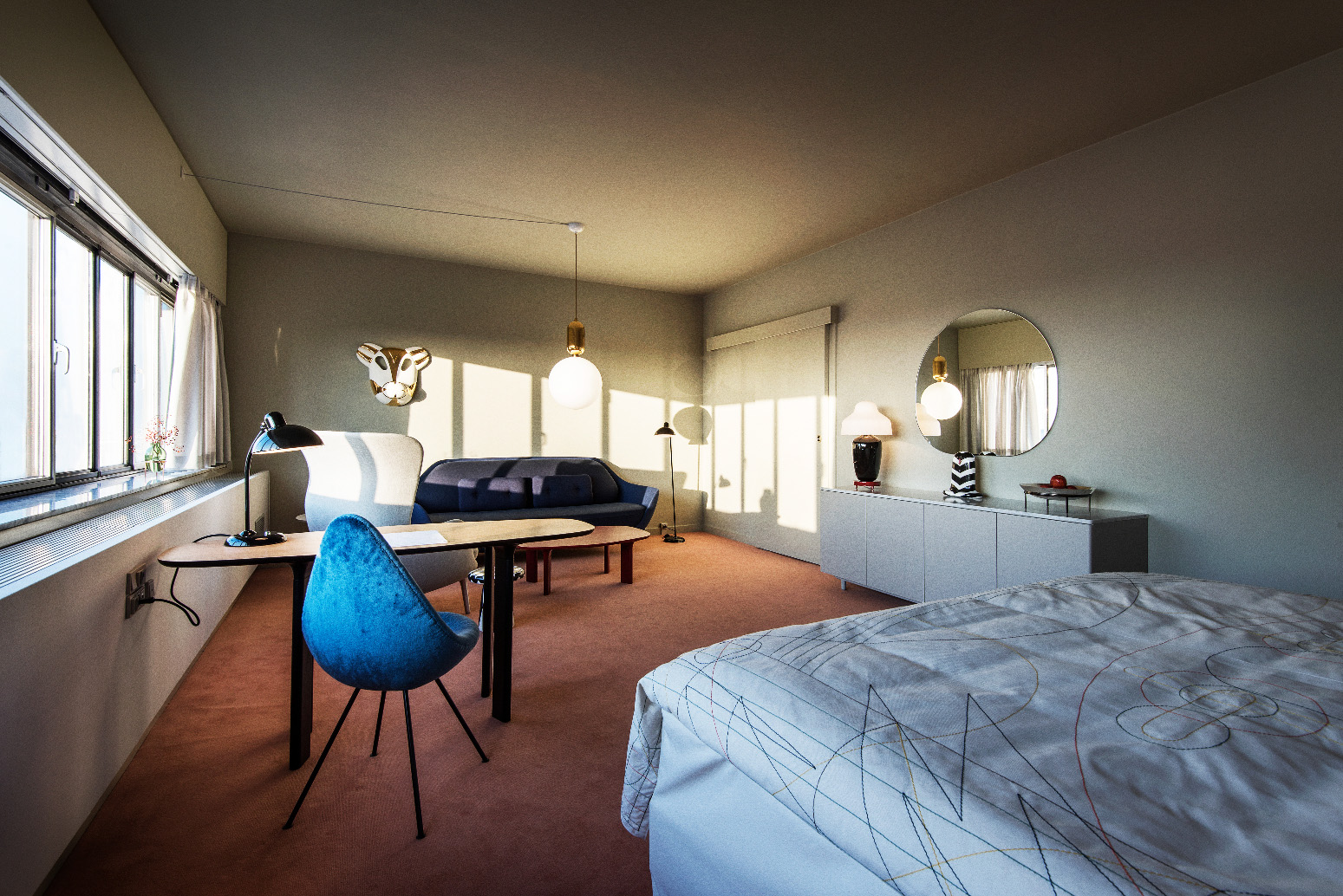 Eat in style and enjoy a relaxed meal at the Café Royal. The children’s menu makes this a great choice for families. The Royal Bar is ideal for drinks or a nightcap with friends. This elegant bar also offers a cake of the day, decadent pastries and freshly brewed coffee. The hotel’s fitness center includes dry and steam saunas, as well as fitness classes, personal trainers and massage services. 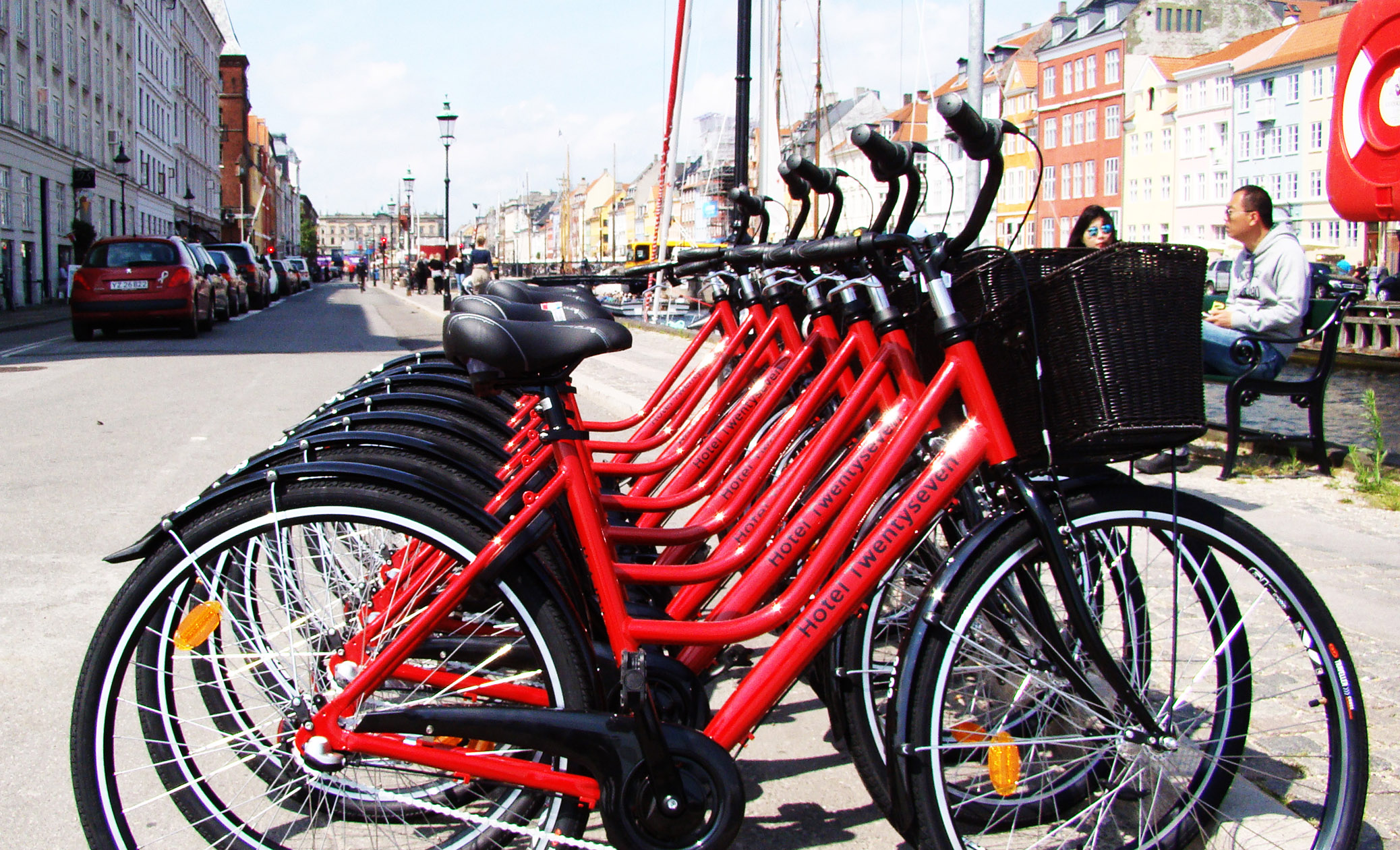 Nearly all the citizens of Copenhagen ride their bikes regularly; be it to school, to work, on errands or just casually, biking is a huge part of the culture there. It is easily the most cost effective mode of transportation, and a good way to show the locals that you can hang. And it doesn’t matter if it’s hot and sunny or if there’s a full blown blizzard, Danes are hard to discourage from riding their bikes.
There are lanes in Copenhagen designated for bikers, as well as traffic lights! If you’re biking during the morning or late afternoon “rush hour,” you will find yourself among dozens of bikers taking up the entire street- it’s quite a sight. 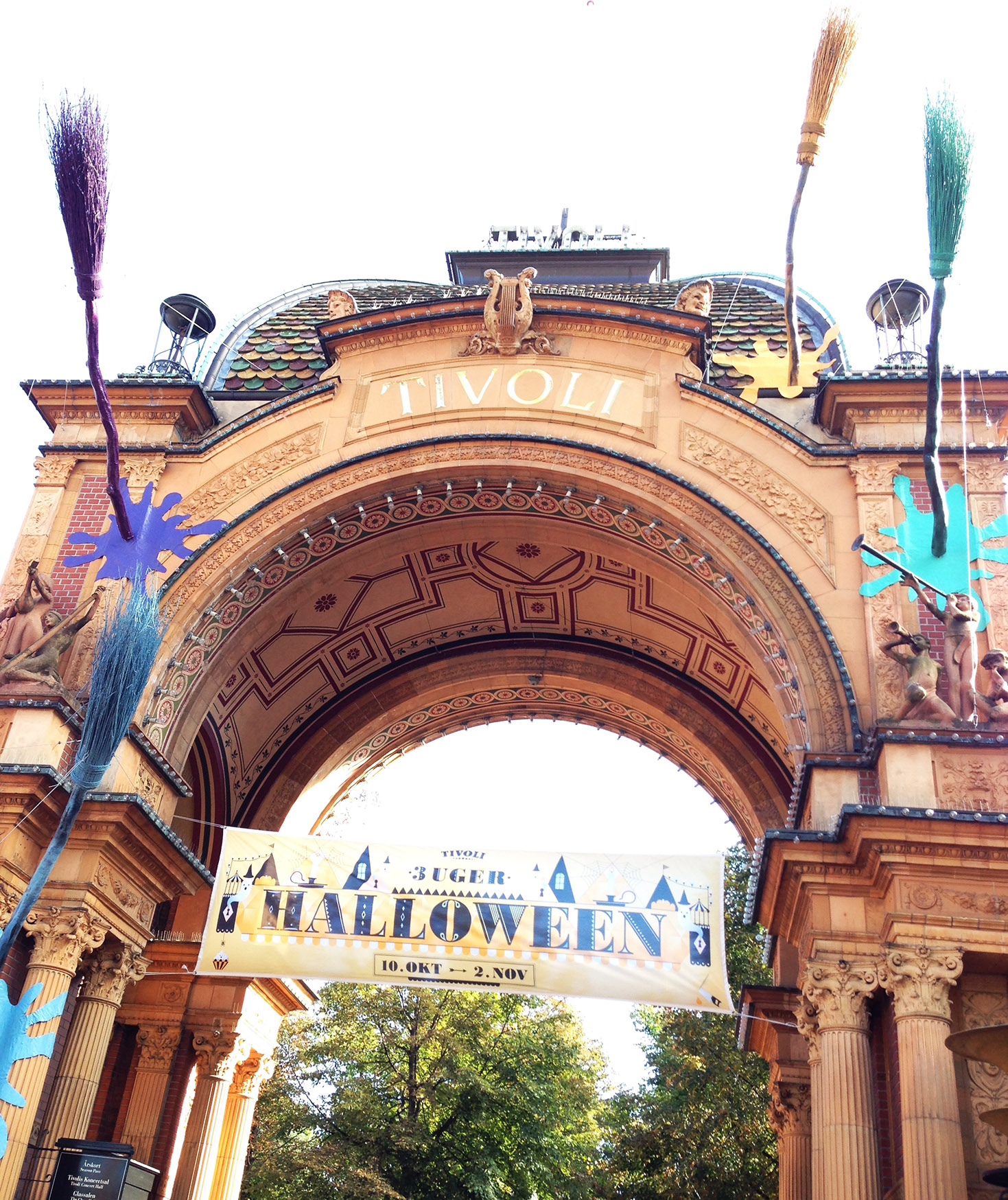 No first time visit to Copenhagen is complete without a trip to Tivoli – the greatest and quaintest theme park in all of Europe!
Opened in 1843, it is the world’s second oldest amusement park (the oldest one is located in Denmark) 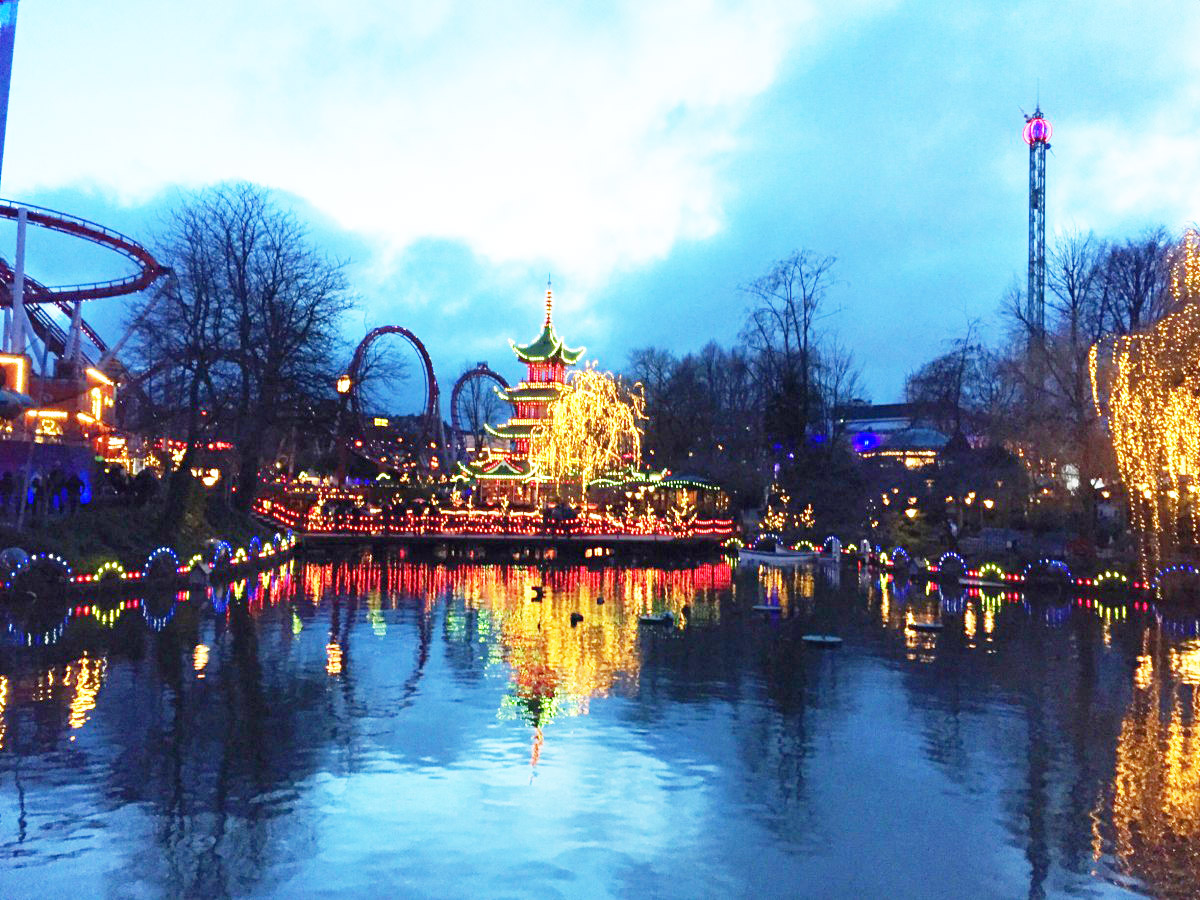 It has one of the world’s oldest wooden roller coasters still operating today that was built in 1914 and has the world’s tallest carousel measuring 80 m. Tivoli Gardens is said to be the inspiration behind Walt Disney World and is a truly stunning inner-city park that’s filled with some impressive and historic rides. Hop on board the Rutschebanen Rollercoaster, a 100-year-old wooden masterpiece that weaves in and out of a (faux) snow-capped mountain… right in the center of Copenhagen! 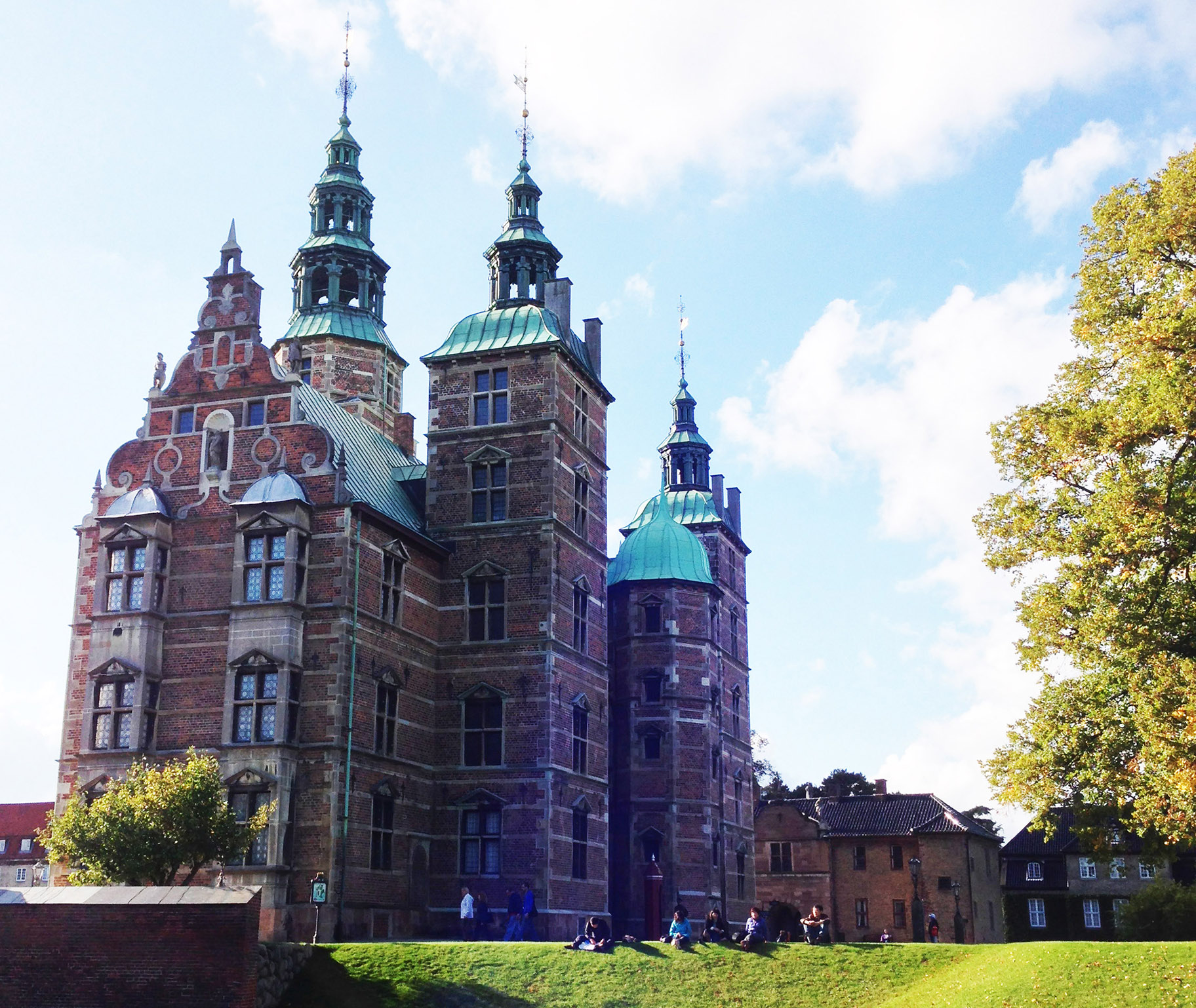 There are lots of castles to explore in Denmark, with Rosenborg Castle in Copenhagen being one of the best. Head here to discover a truly stunning piece of Danish history with amazing artistry of the castle which embodies Danish architectural prowess at its finest!
Among the main attractions is the Knights’ Hall with the coronation thrones and three life-size silver lions standing guard. Tapestries on the walls commemorate battles between Denmark and Sweden.

The interiors are well-preserved and lead you through a journey in time. You can experience the king’s private writing cabinet, his bathroom, and see wax figures of former royal inhabitants.
Rosenborg also houses an exquisite collection of Flora Danica and one of the world’s finest Venetian glass collections, both set in tower chambers.

The crowns of the Danish kings and queens are kept in special vaults at Rosenborg Castle and are embellished with table-cut stones, enamel and gold ornamentation and the emeralds being among the world’s finest.
Rosenborg Castle has a sister museum at Amalienborg Palace displaying royal history from the mid 19th century unto today.

Board a relaxing Boat Tour 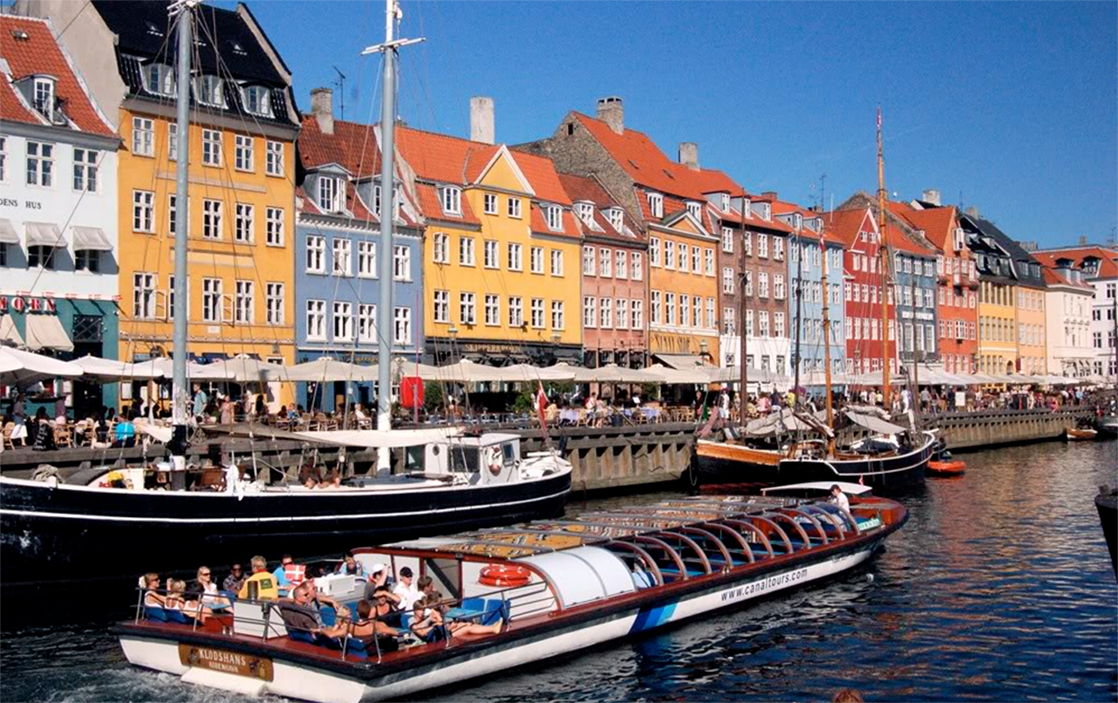 There are many ways to see the city of Copenhagen, with its waterways being one of the best! Board a boat near Nyhavn harbour area and discover a whole new perspective of Copenhagen.

Must have a dog! 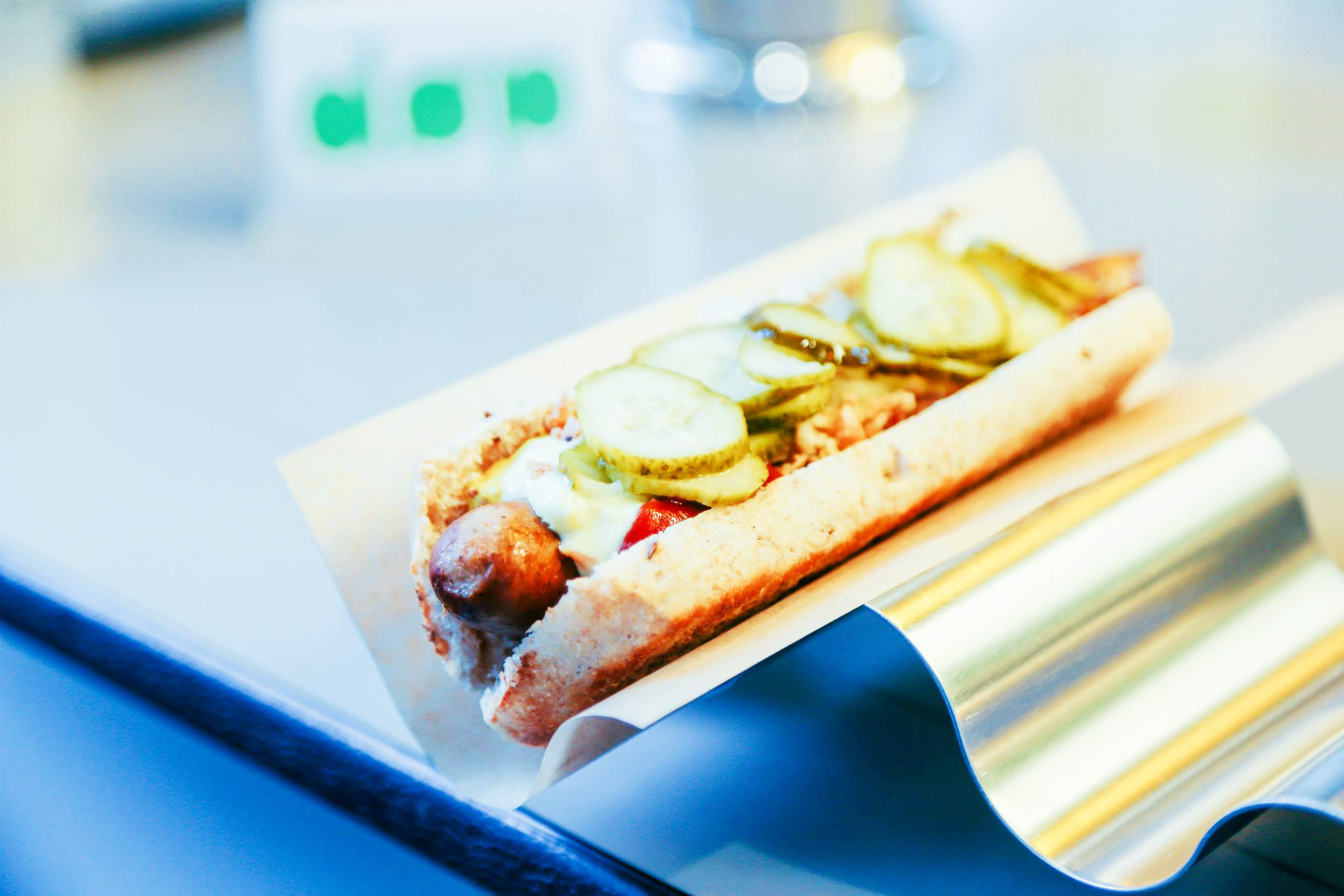 If you’ve ever visited a Scandinavian country, you’ll have to realise that their love of hot-dogs is deep and very, VERY real! It’s not just any old sausage slapped in a 3-week old bun (served to you at a cinema), these hot-dogs are deliciously gourmet.
Hot dogs can be found in many of the market stalls or even in the central district of Copenhagen itself. If you’re not ‘into’ bread buns… no problem, it’ll be replaced with creamy mash or tasty, seasonal beets – all served with your very own type of sausage, cooked just how you like it!

Enjoy the colourful houses at Nyhavn

Every picture you’ll ever find of Copenhagen will include these colourful houses. Take a wander around the area and enjoy some of the pretty little homes, cafes and shops that make up this part of town.

Experience a Pastry at Lagkagehuset 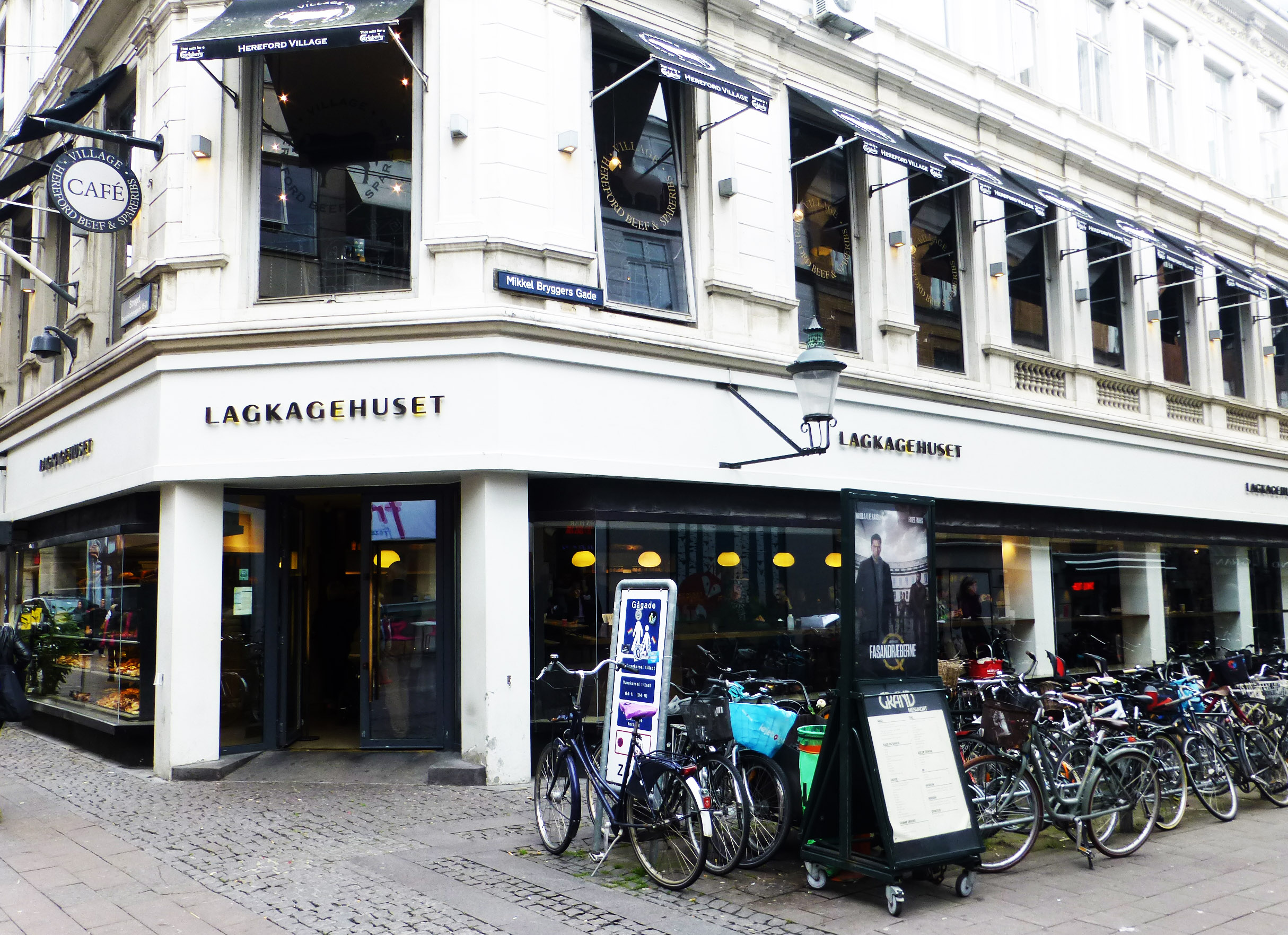 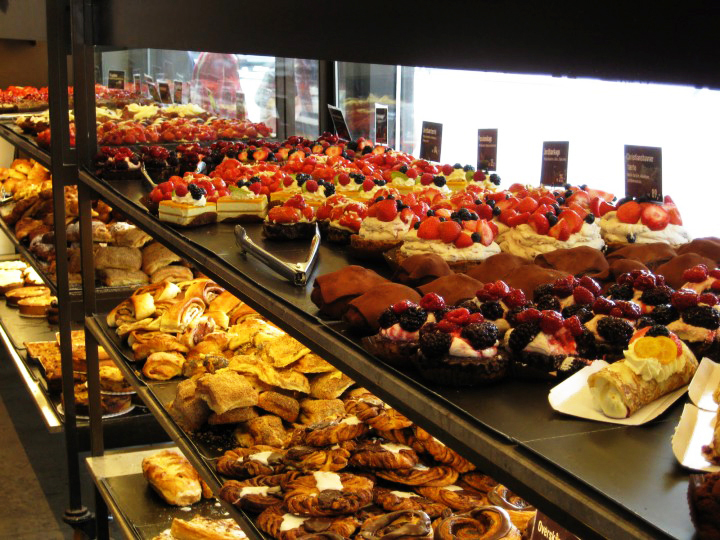 Lagkagehuset is considered one of the best bakeries in Copenhagen, has several branches and is so popular that there’s a constant lineup. There are bar tables for you to sit and enjoy the baked delights.

Denmark’s weather is quite mild and the climate of Denmark is temperate, made mild by mostly west winds and by the seas surrounding Denmark almost entirely. The winters are not particularly cold and the summers are mild.

Denmark doesn’t have a lot of fluctuation between day and night temperatures, but wind gusts and changes in wind direction can quickly change the weather and temperatures. The wind is stronger in winter.

Denmark’s average temperature in the coldest month, February is -1°C and in the warmest, July 17°C. Rain in Denmark comes on a regular basis year-round, there are no true dry periods. The annual rainfall in Denmark averages 61 cm. Copenhagen has an average of 170 rainy days. The greatest rainfall comes between September and November. Snow is rare. Because of Denmark’s northern location in Europe, the length of the day with sunlight varies greatly which is typical for Scandinavia. There are short days during the winter with sunrise coming around 8 am and sunset 3:30 pm, as well as beautifully long summer days with sunrise at 3:30 am and late sunsets at 10 pm.

The shortest and longest days of the year have traditionally been celebrated. The celebration for the shortest day corresponds roughly with Christmas.