Lorne is located in Victoria and sits in one of the most beautiful coastal roads in Australia, the Great Ocean Road. The main foreshore of Lorne is lined with Cafes and boutiques with not a fast food chain in sight. The locals have managed to keep Lorne mostly free of large commercialisation and maintained its casual feel.   The main attraction in Lorne is the wonderful beach, which is ideal for swinging and surfing.

Lorne also offers a number of trail walks and waterfalls to explore in the Great Otway National Park. The waterfalls include Erskine Falls, Phantom Falls, Henderson Falls, Upper and Lower Kalimna Falls, Sheoak Falls with Cora Lynn Cascades and the Swallow Cave. The most popular walks are starting from the Sheoak Picnic Ground, along with the St George River, Erskine River, Sheoak River, Lemonade Creek and the Cumberland River. Historical walks include The Tramways Track, Shipwreck Plaque Walk, Stony Creek Walk and The Doug Stirling Walk.

Other local attractions include The Twelve Apostles, Erskine Falls, Bells Surf Beach, The Great Ocean Road, Teddy’s Lookout and for kids big and small the Trampolines on the foreshore. (See Photos below of all these attractions).

Scroll down for more information and images on Lorne… 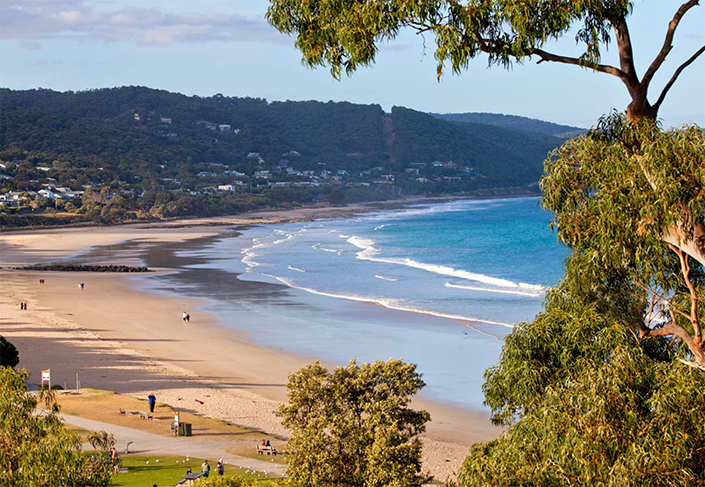 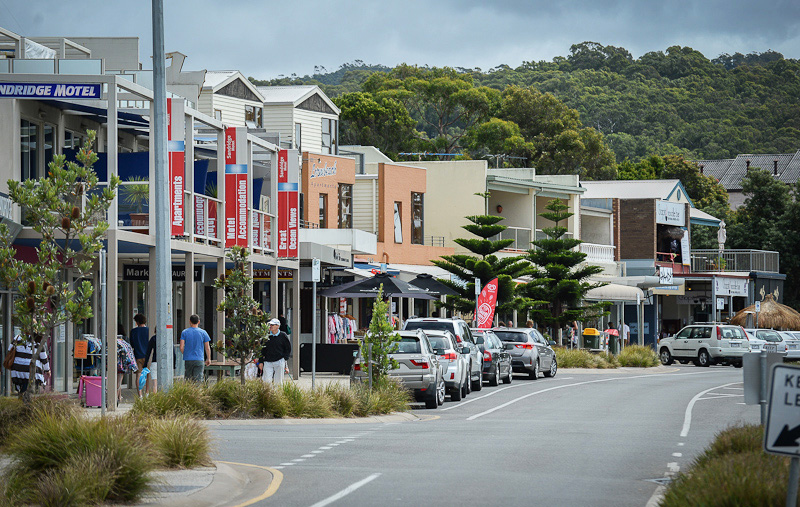 Your food choices in Lorne are many with fine dining at Maple Tree Lorne Seafood Restaurant to fantastic Mexican food at Mexican Republic. A stand out for Trafoodel is the Bottle of Milk Burger Restaurant and The Grand Pacific Hotel. Both offer great service and outstanding meals.

Bottle of Milk is situated on Lorne’s main st, Mountjoy Parade and was opened in 2008 by Brett Graham and Robert Lowther.

The Bottle of Milk use local premium quality Australian beef on freshly baked buns and condiments made either in the house or locally.

The Grand Pacific was built in 1875 with fantastic ocean views in one of the unique settings on the coast.  Fully restored, The historic Grand Pacific Hotel provides comfortable and affordable dining in a classic restored building with amazing views.

There are two function rooms that can cater up to 200 guests. Also available is the Grand Pacific Ballroom offering floor to ceiling windows, with private entry and views across Lorne Pier. 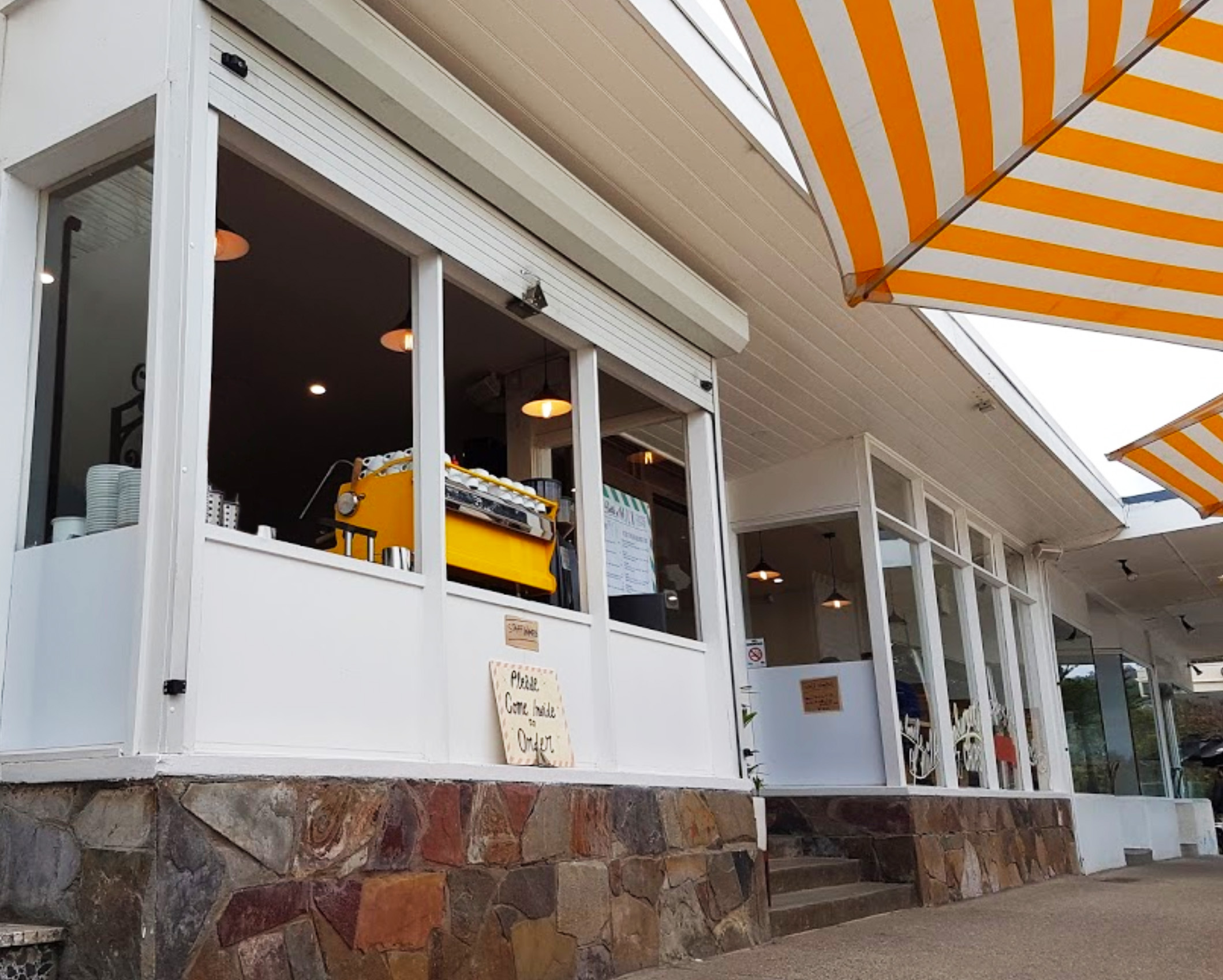 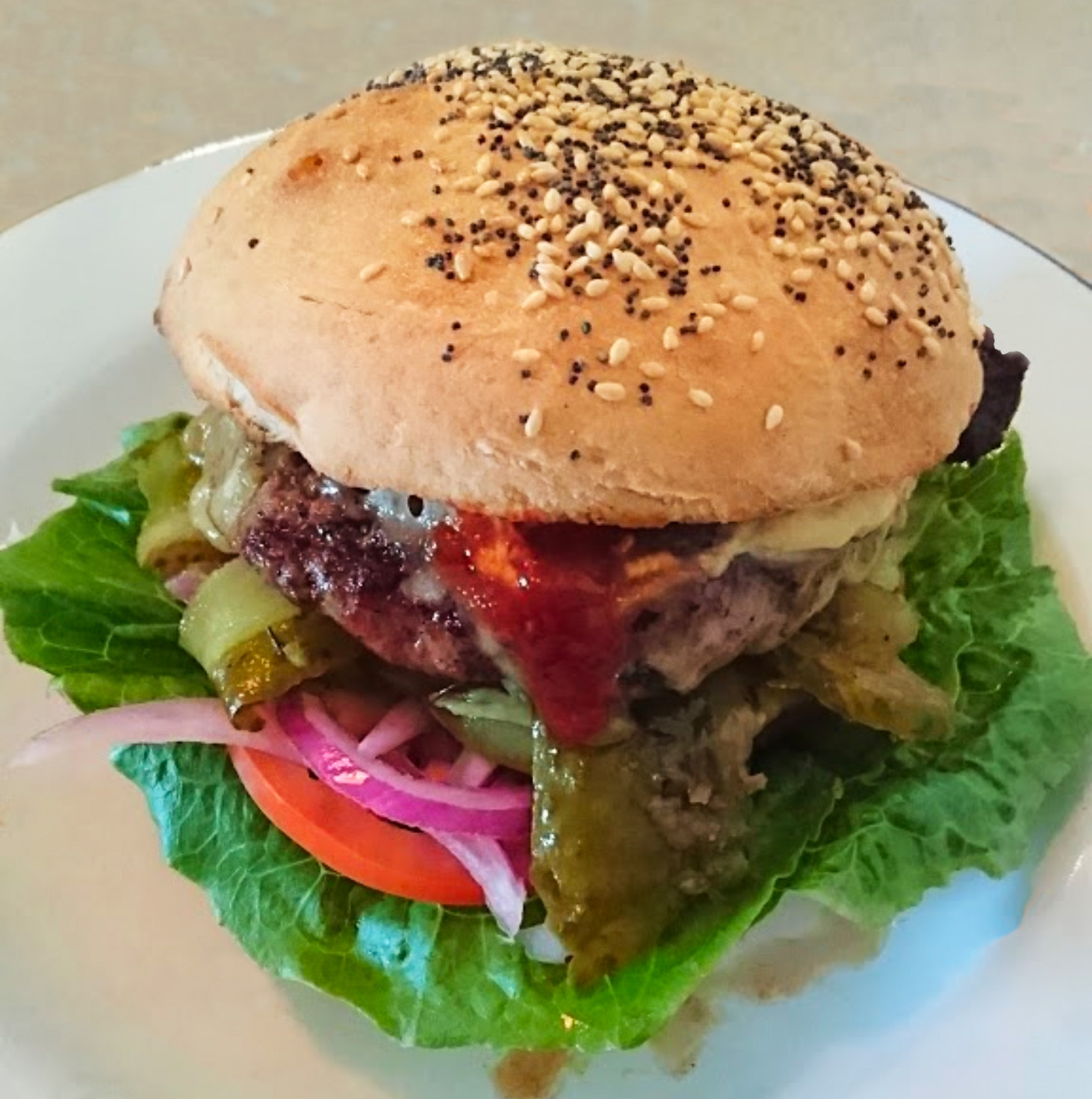 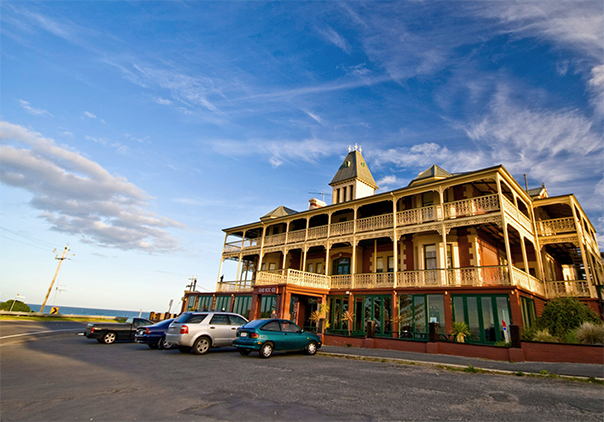 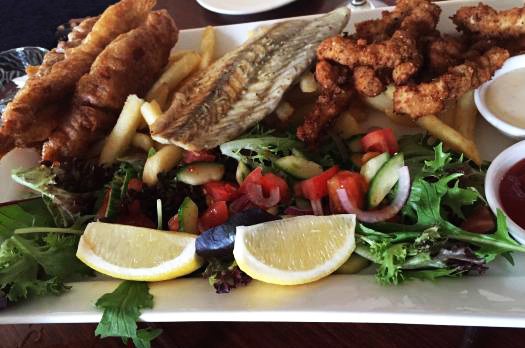 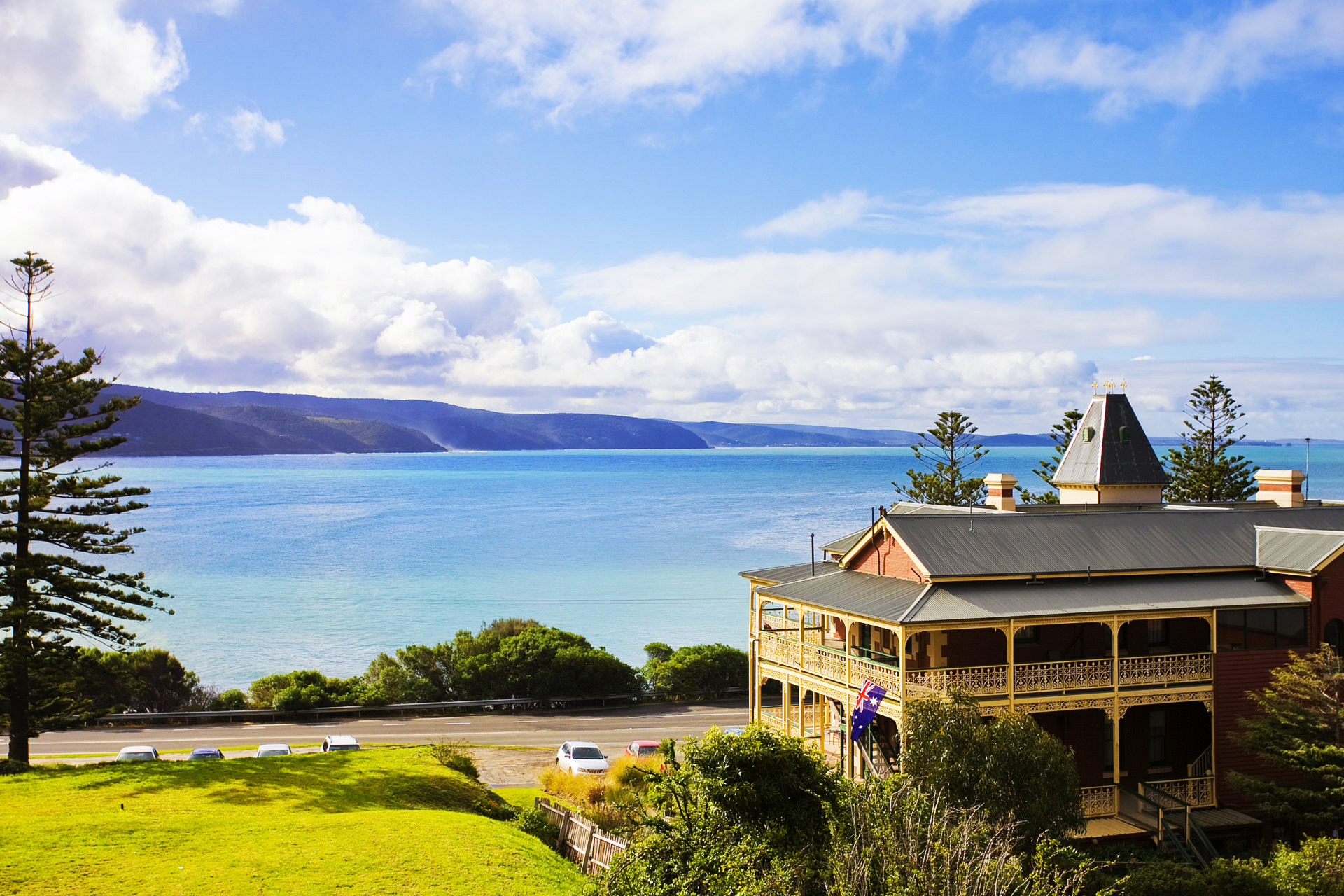 For accommodation, Trafoodel recommends the Mantra hotel that is located directly on the beach. It has an indoor swimming pool, spa, tennis courts, gym and great Bar/Restaurant. There are various types of rooms ranging from self-contained apartments that are great for families to single rooms for couples. 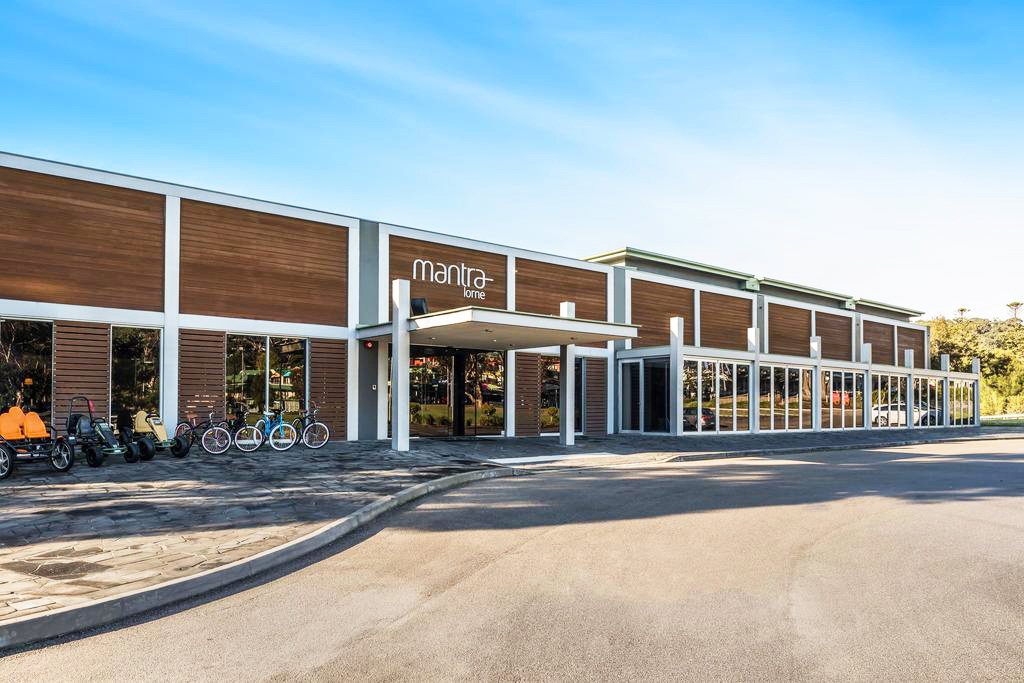 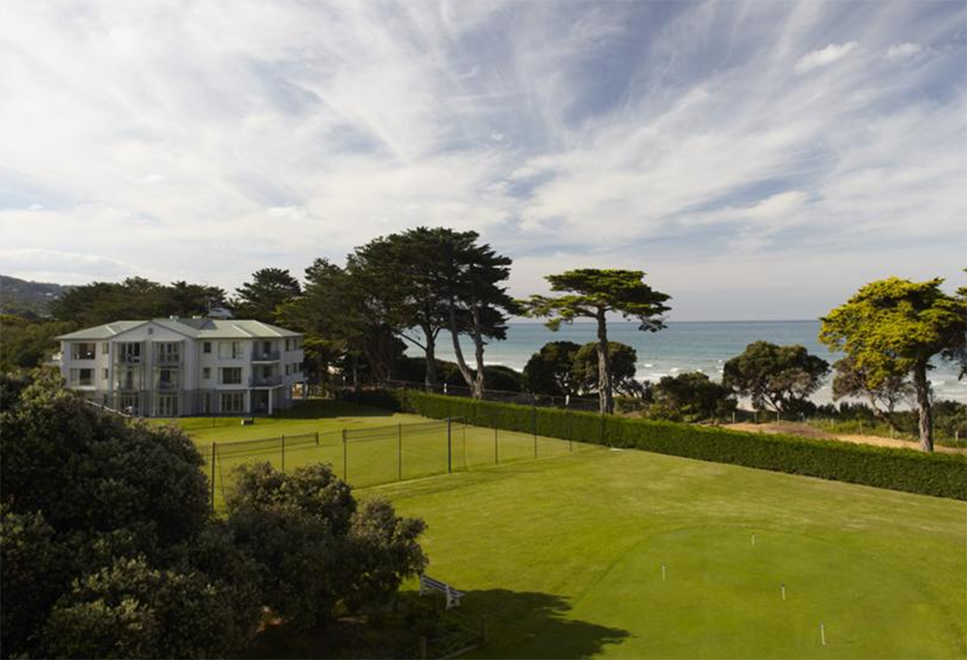 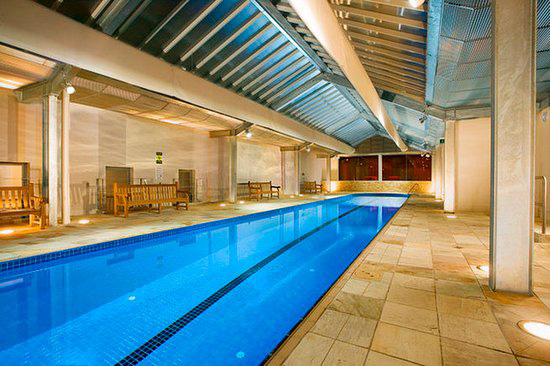 The weather and climate in Lorne is dependent on the geography of the area. It ranges from rainy and damp in the Great Otway National Park compared to the areas along the coast. The weather and climate of the Lorne is influenced by the Southern Ocean which keeps winters warmer and summers cooler than in other parts of Victoria.

Lorne has a popular beach paralleling the Great Ocean Road and well-established foreshore reserve. The southern end of the beach is bordered by the long sandstone rock platform that extends 1 km out to Point Grey and the Lorne wharf. Point Grey protects the beach, with waves averaging 1 m. These produce a low, wide, attached bar, with rips only occurring during and following higher waves. In addition, six small wooden groynes and one large rock groyne have been built across the beach, supposedly to prevent beach erosion. Usually, a low, wide beach break more suitable for beginners. During moderate to large swell, Lorne Point provides good right handers, while further out at Point Grey a fuller wave is preferred by windsurfers and wave skis. 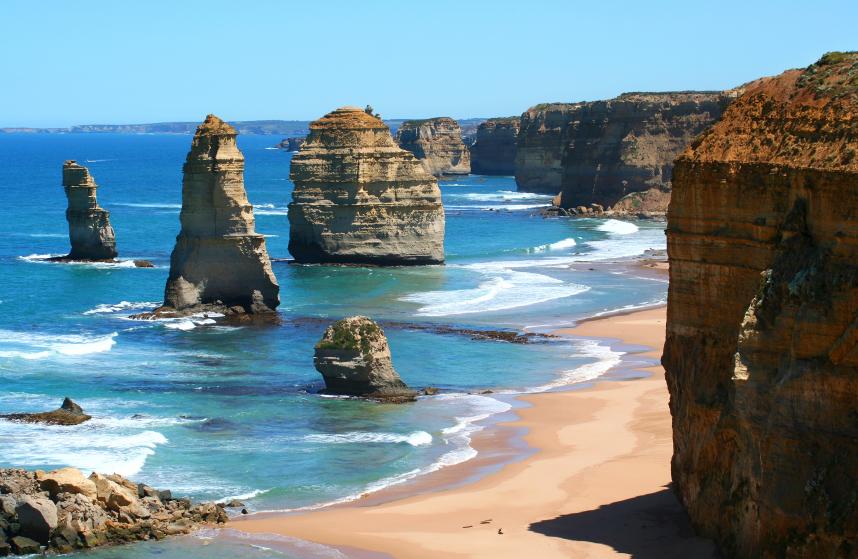 Located approximately 275km west of Melbourne along the great ocean road, the Twelve Apostles are a group of limestone stacks off Port Campbell National Park. These amazing rock stacks offer a dramatic picture along with this outstanding coastline of Victoria and rise up out of the Southern Ocean to create a dramatic scene that has to be seen to be believed.

The Twelve Apostles were created as a result of constant erosion of mainland limestone cliffs by the water and wind of the Southern Ocean. The process began around 10-20 million years ago and the harsh weather conditions gradually eroded the cliffs into caves which eroded further into arches and eventually collapsed, creating the stacks seen today. 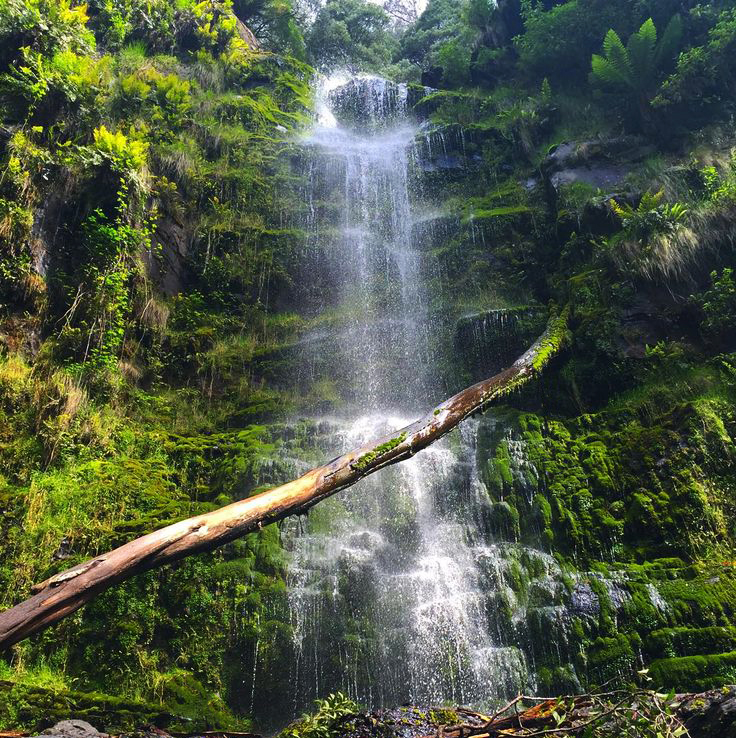 It is an easy drive through the eucalypt forest on sealed roads. The path from the carpark is well made and relatively easy. The steps down to the lower viewing area are more difficult, but the walk in summer is a lush and cool experience. The lower platform affords a front on view of the 30 metre water falls. 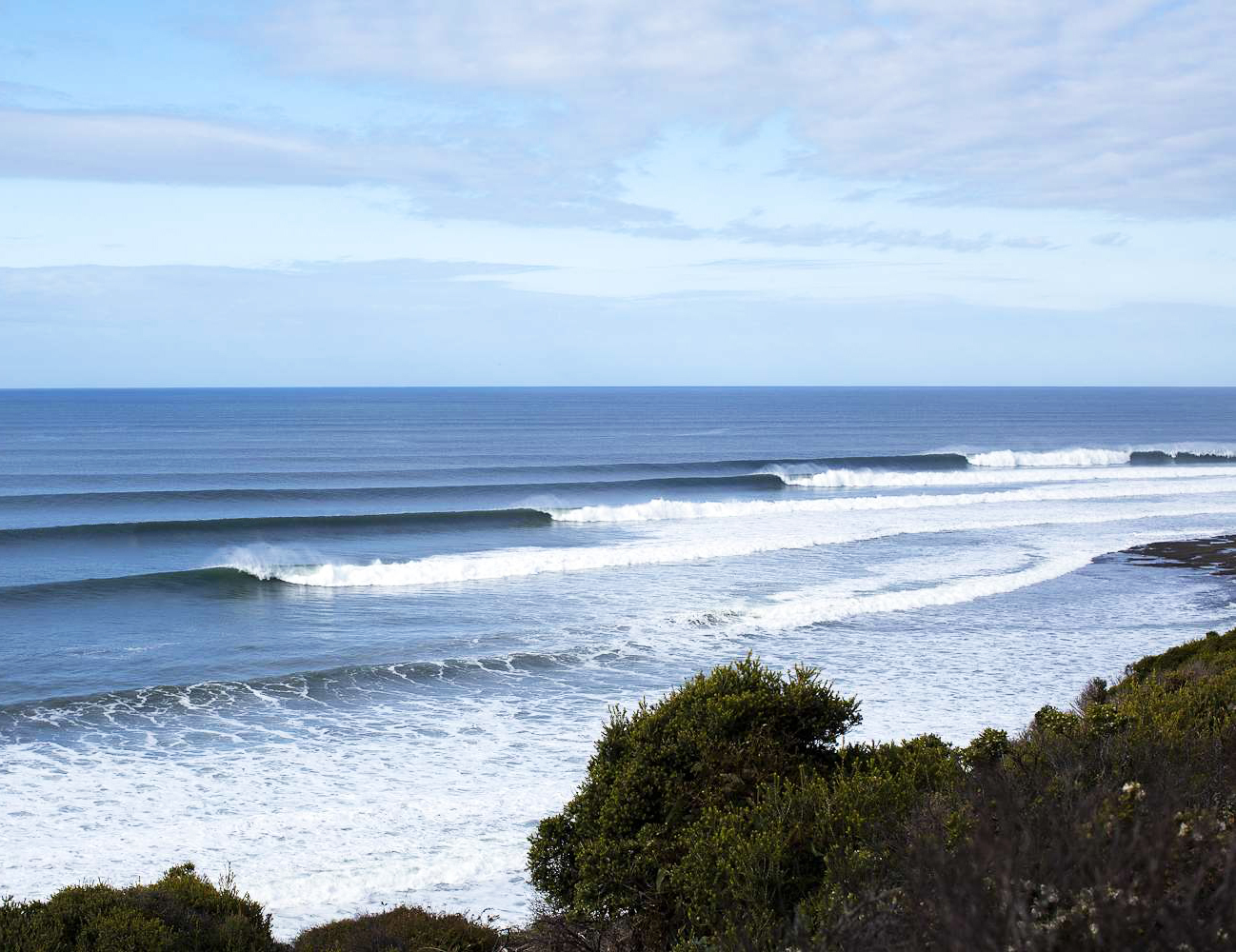 Bells Beach is Victoria’s most famous surfing beach and one of the world’s great surfing breaks. The excellent break is due to a combination of clean waves, that have refracted around the Otways, and particularly a gently sloping limestone reef off the southern point that produces one of the world’s best right handers. It can handle anything from 1.5 up to 7 m.The world’s longest running surfing contest began at Bells in 1961 and continues every Easter. In recognition of its surfing status, the Victorian government proclaimed it the state’s and Australia’s first Surfing Reserve in 1971. Bells is serviced by a good road, a large car park, viewing areas and facilities. The walk to the beach is still, however, down the gully at the southern end of the beach. The beach is just 300 m long and faces south-east, with prominent, 40 m high, limestone headlands at each end. Waves average 1 to 1.5 m and the beach is composed of coarse sand which, even under high waves, stays steep and barless. A normally low shore break becomes very heavy in high waves.

During low waves, the beach is relatively safe close inshore, however, any surf will produce a rip running along the beach and out toward the northern point. During big seas, this rip becomes an express ride for the surfers.

Bells is a world class right when above 1.5 m. When smaller, the waves break close into the headland and produce a right called Rincon. Further around the head are two more reef breaks which work below 2 m, called Centre Side (a right) and Southside (a left).

The water is deep right off the beach, while at low tide you can fish from the reefs at each end. 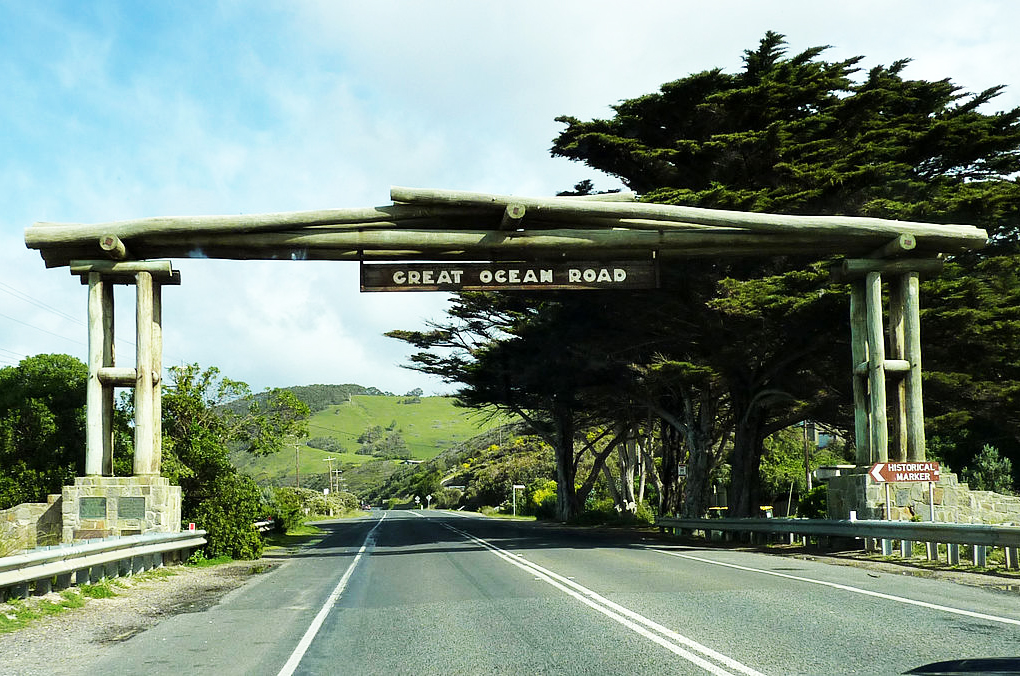 One of Victoria’s most scenic drives, the Great Ocean Road is a magnificent three-day self-drive touring route from surf capital Torquay to the iconic 12 Apostles, ending at historic fishing village Port Fairy.

Starting from Melbourne, it’s an easy drive taking you along cliff tops and surf beaches and through lush rainforest. Along the way, spot koalas, kangaroos and even whales, zip-line your way through a treetop canopy, climb to the peak of a volcanic crater and relax over regional dining atop a cliff or by the beach.

Most importantly, take the time to stop at the lookouts and watch out for wildlife. It’ll be worth it. 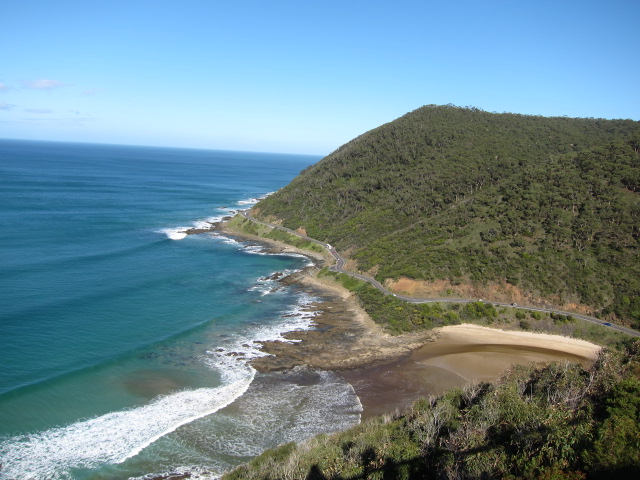 With sweeping views of the breathtaking Great Ocean Road Coastline in one direction and scenery of the hinterland in the opposite, Teddy’s Lookout and walking track is widely considered one of the top locations for taking in the region’s famed coastal panorama. Easily reachable just a short distance from Lorne, visitors can make their way up the newly-constructed walkway and be mesmerized by surf breaking into the mouth of Saint George River or gaze out from the lower platform onto a wonderful landscape of fern covered valleys, mountainous peaks and gorges. 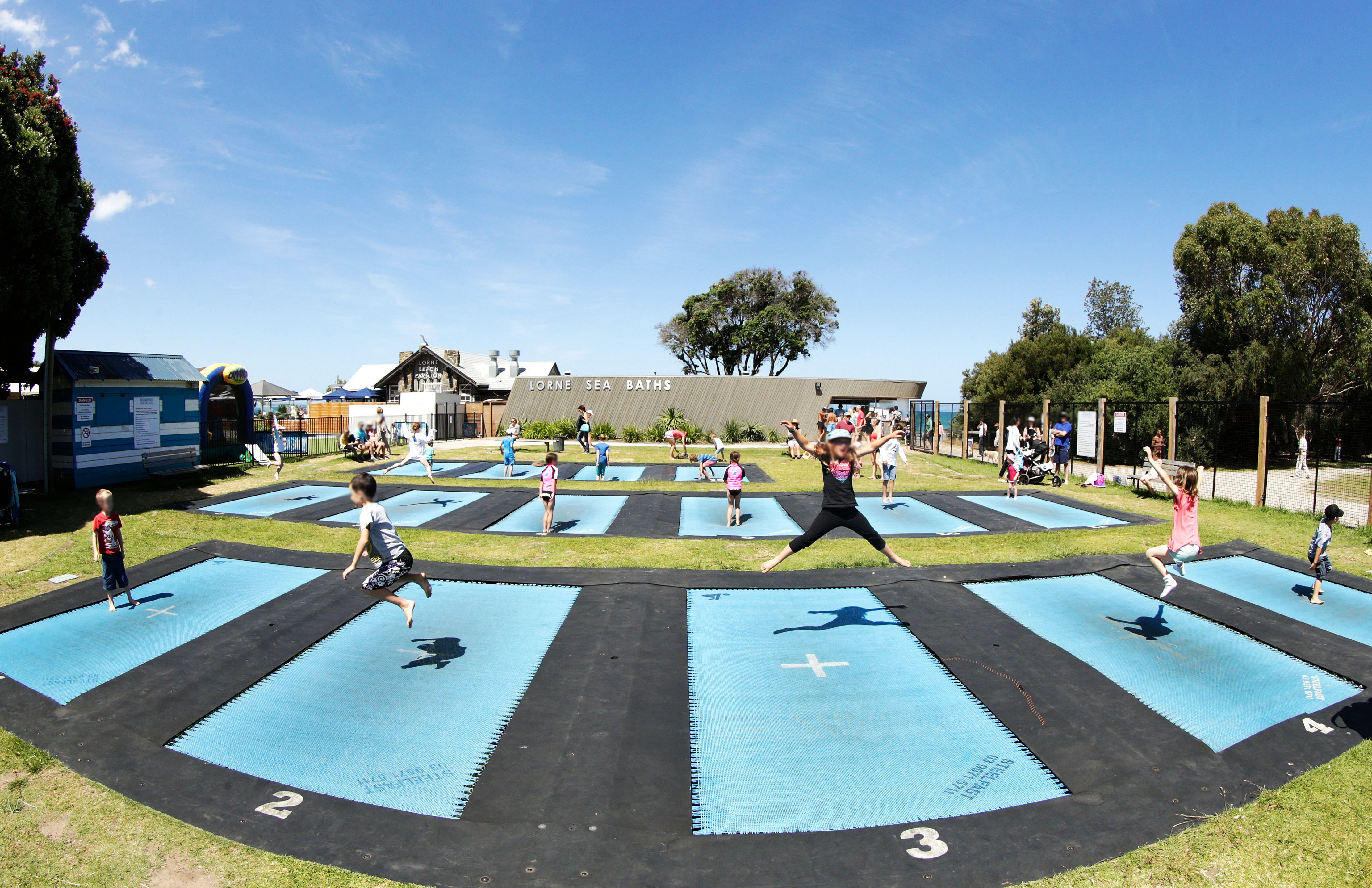